THE WIN DUROW WAS WAITING FOR 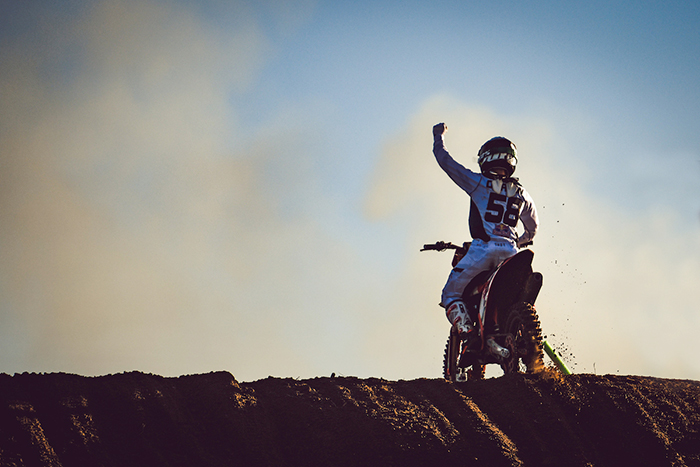 In what proved to be an unforgettable weekend of racing, Red Bull KTM snatched up multiple victories at the third round of the National Motocross Championship in Welkom. It was a day of celebration for the entire orange team with MX1 star Tristan Purdon taking top honours, new-recruit Cameron Durow snatching the win in MX2, High School Class talent Jonathan Mlimi extending his points lead, and young gun Trey Cox defending the Pro Mini red plate. 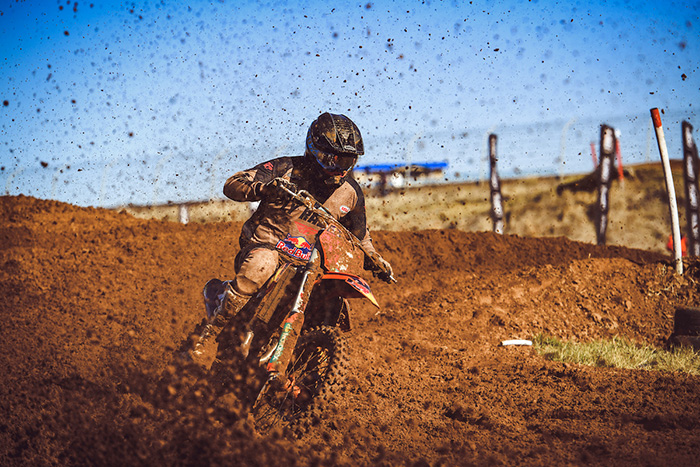 All eyes were on 18-year-old Durow on Saturday, who made it clear from the moment the gates dropped this season that he would be a force to be reckoned with. After setting the fastest qualifying time, the youngster set off to snatch the MX2 victory he has patiently been waiting for since he last won a race in this class in 2019.

The rider started the day with a consistent pace and finished the first moto in second place. He came back swinging in the second moto and his blistering pace saw him get the holeshot. With an overall victory within his reach, Durow pulled an early lead and didn’t look back. 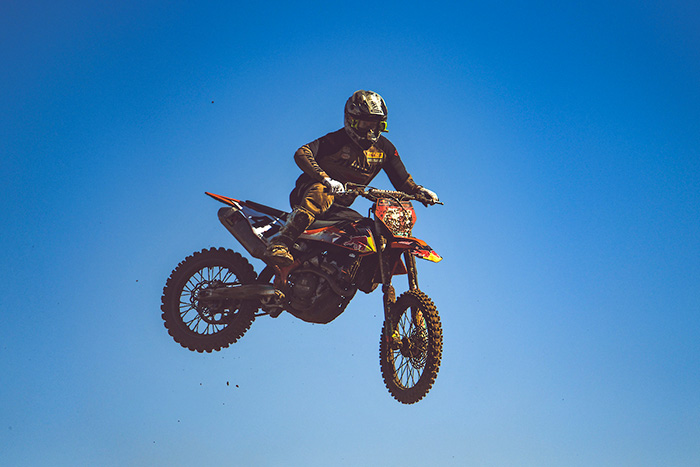 “This is the first time I’ve won in this class since 2019 – I’ve been injured four times since then! I even know the exact number of days since the last win and I’ve been working towards repeating that victory ever since. It meant a lot to me to finally achieve what I have been aiming at for so long,” said Durow.

Putting on yet another eye-catching performance was Red Bull KTM teammate Tristan Purdon. The rider couldn’t have asked for a better day in MX1 when he went 1-1 to take the victory overall. While MX2 proved to be a more challenging race for the rider, Purdon managed to end the day on the podium with a third place overall. 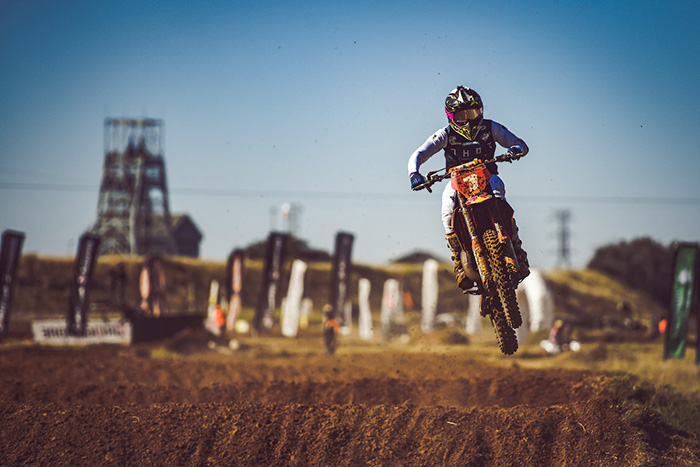 Having defended his points lead in both classes, the motocross star will once again line-up with both red plates in the next round. With his sights set on winning both championships this season, Purdon commented:

“Leading both championships isn’t easy and it comes with a lot of pressure. I’m handling it well because of the support I’ve been getting from the whole team and that makes me want to keep fighting. After MX2 this weekend I’ll be working on my starts leading up to the next round, but overall, I’m happy with the way everything played out.”

Red Bull KTM teammate Jonathan Mlimi was off to an impressive start this weekend when he took the holeshot in the first moto and lead the heat from start to finish. He had a challenging start in the second moto by his own high standards, but managed to fight his way back up to the front of the field to secure the victory overall. 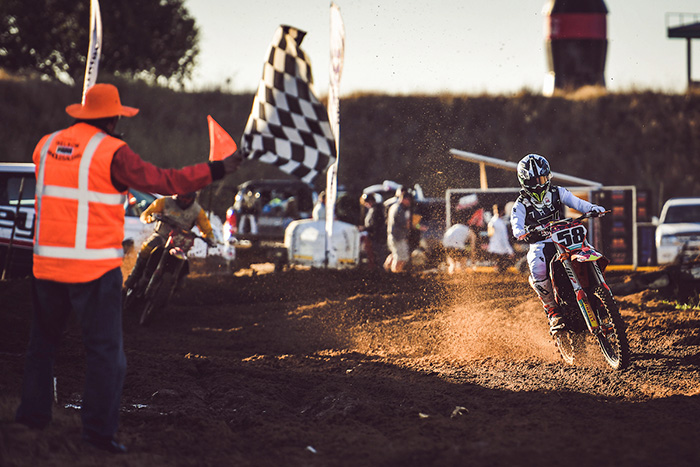 “My KTM 125 SX handled so well - the setup was perfect! I learnt this weekend to be more patient when I’m in a battle to get to the front - I find when I rush the process I tend to make small mistakes. I’m really happy with the way the season is playing out and just plan to stay consistent - that always pays off in the end,” said Mlimi.

A cherry on the top of what was a successful day of racing for Red Bull KTM was yet another consistent performance from young gun Trey Cox. After setting off with the holeshot, the Pro Mini rider had an unfortunate crash in the first moto. With a determination to defend the red plate, he fought his way back up to fourth place. He came back swinging with a solid start in the second heat and held a consistent pace to finish the moto in second place.

“I’m so happy to have held onto the red plate. In the weeks leading up to the next round I’m going to work on eliminating small mistakes. I’m happy with my pace and learnt this weekend that it’s not over until it’s over – that ‘never give up’ attitude always pays off in the end,” said Cox.

Bruce Joelson was a long-time friend, client and all-round good guy, MD and CEO of Elna Sewing machines and many other popular associated brands, his love for motor racing both two and four wheels got him into local racing, sponsorship and personally doing a lot of track racing himself. It was in the late ’70 s that his motor racing enthusiasm started in earnest.

He also sponsored the first MX women series, ran a phenomenally successful MX National SA Team, and off road enduro Team, twice sponsor of USA legend Malcom Smith who was a good friend. on two and four wheels in the Roof, Bruce was a navigator to Malcolm in the car and won the Roof of Africa, Malcolm being the only competitor still to today to win the Roof on 2 and 4 wheels. 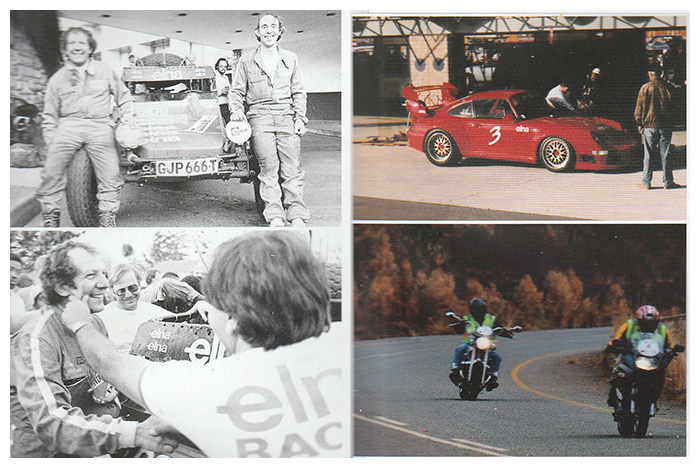 He also sponsored several international and local car track events and national series such as the Porsche Turbo Cup.  Earning the award for several years as Mr. Sponsorship in South Africa by the media.

He was often seen at all the racetracks around the country, and well known and respected by all. He had one of the greatest collection of cars and motorcycles, all housed in a spectacular state of the art workshop.

His own track racing kicked off in drag racing when he raced a Ford Sierra V8 and won the Streetcar series in ’84. Then came the years he raced Porsche cars. Starting with a Porsche Carrera 3.8 GT. It was a special light weight version. Due to the unusual color, he called it ‘Pinkie’. It was phenomenally successful, winning numerous races that the SA Porsche Club arranged. Later, in ’97, I started racing a Porsche GT2 twin turbo race car. This car made 600 horsepower and was amazingly fast. He won many races all over South Africa and in Mozambique (Maputo). In July of 2000, he won the 2-hour endurance race at the Welkom Raceway a year later he won it again.

He will be remembered for saving many struggling events, teams, and riders and helping all competitors.

Bruce was well respected in the motoring industry, known and loved by all riders, teams, the media, and the industry and will be sadly missed by all who knew him, condolences to his family.

Motorcycle helmets, a major safety equipment for motorcycle riders, have been allocated a new import tariff code by passing of the recently published Government Gazette (No. 44546 of 7 May 2021). A process that was started by AMID almost exactly four years ago, has led to the Department of Trade, Industry and Competition reducing import duties for helmets to zero from its previous rate of 25%.

The essence of AMID’s application was that there is no local helmet manufacturing industry in South Africa that requires protection. Additionally, unfavourable exchange rates made the purchase of a new helmet less affordable, and riders were using their helmets for longer periods than what was deemed safe. A further concern was the noticeable use of aged, unsafe and unsuitable helmets used by the growing population of commercial riders which had seen a major upswing since the start of the COVID-19 pandemic.

Although it may take some time for helmet stock presently in the country to find its way off the shelves, Importers have already indicated that the reduction in duties will positively affect the costs of helmets and the benefit of such will be passed on to consumers. AMID is confident that this will make the purchase of a new helmet more affordable and encourages riders, whether it be for commercial or recreational purposes, to no longer use helmets that are past their useful life span. . It must however be noted that the import duty was but one component of a helmet’s costing, so the removal of duty will not result in a 25% reduction of the retail price.