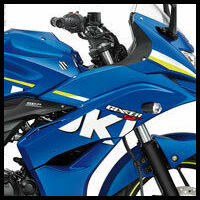 Thank you for the entertaining and informative review on the Gixxer 150! Love it! I had my eye on this bike for a while as a first bike for my wife. Your review came in the nick of time and I took the plunge.

In your review of the bike, you noted the possibility of tweaking the carb jetting, and also getting clever with the gearing. Could you possibly direct me to someone capable and knowledgeable who’d be able to assist me with such options without messing up the bike? I’m certainly not an expert on this, but I do know you don’t want anyone just fiddling with these aspects of your brand new bike.

I appreciate your feedback! Keep up the good work!

Hi, Noddy here from www.bikeworx@icon.co.za and I just thought you guys would like to see these, which we weighed the other day? 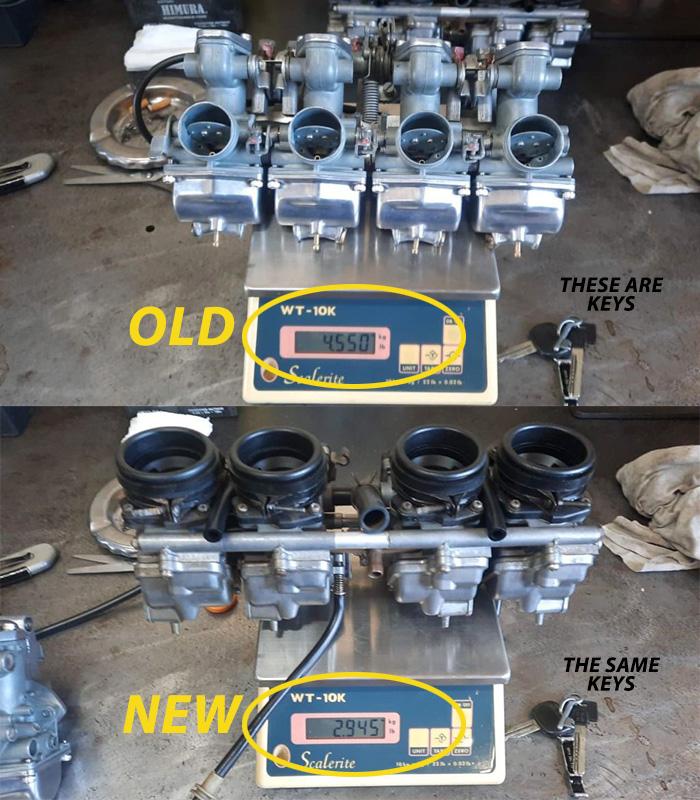 Quite amazing how 1.6kg have been shaved off, and that’s including the bell-mouths. Just though it’d be interesting to show how the constant quest for saving weight happens with every part of the motorcycle.

Thanks for that and if any of you have similar things to show us please mail Bill, at the email address at the top of the page... 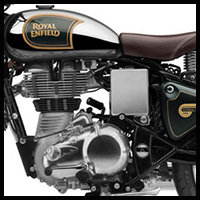 I’m not asking a question about my bike’s problems, instead I thought I’d tell you about a recent issue that I managed to fix.

I have a Royal Enfield 500 Bullet that broke a piston ring and subsequently damaged the piston irreparably. After many calls and searching throughout South Africa I could not find a replacement piston, which was irritating to say the least.

After a few beers in the pub, with piston in hand, my friend said he thinks he has one that looks very similar and might work. He owns a car spares store in Pretoria. So the next day I took it to him at the shop and he pulled out a piston from a brown paper bag.

To my surprise it was 99% identical except it was 1mm wider in diameter. So I took him the barrel, as it has plenty of ‘meat’ in/on the liner, and he bored it out to fit the piston with the correct clearance. I then put the bike back together and it has now ran perfectly for over a 1,000km.

The piston came from a Toyota Cressida and cost R350. Now how cool is that and I thought it would make an interesting article for your site.

Now that’s very interesting and thanks for your time and effort to let us know, and our readers too if they have the same problem. Well done. 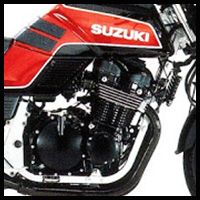 Q: I have a very clean 1981 Suzuki GSX1100, the one with the silver/blue tank colours. I’ve owned it for over tens years and use it daily to go to work and, enjoy weekend runs with the wife happily sitting on the back.

It has always been serviced and taken care of and has just over 81,000km on the clocks. However, recently it has started to vibrate badly on idle and seems to be a bit ‘juddery’ when I let the clutch out and pull off.

I’ve already taken out all of the clutch plates and springs, which all seem to be fine with plenty of ‘meat’ left on the friction plates in particular. The springs aren’t broken either and seem to have all the same tension on each.

So if you could pass on any advice to point me in the right direction I would be very grateful. I do know Bill used to drag race with these engines so he might be the one to ask?  Looking forward to your answer…

A:  I would say the problem still lies within the clutch, or basket to be more precise, and you’ll have to go back inside the motor to investigate further.

Take out the plates and centre hub and you’ll see a large nut (32mm), which is what you’ll need to remove. You don’t really need any special tools, just put into gear and hold down the rear brake, which should stop the clutch basket from rotating, then undo the nut after bending back the tab-washer.

Once the basket is in your hands look at the back-plate and damper springs, these normally cause this issue. The springs are too soft from stock and go ‘slack’, which can cause the back-plate to crack, causing vibration. If it has broken some pieces might be in the sump, so you’ll have to clean them out and make sure you find ALL the pieces.

The best thing is to replace the back-plate and springs with a heavy-duty conversion. Randburg Motorcycles in Jo’burg can assist with this and then your bike will last forever, and probably longer than you will.