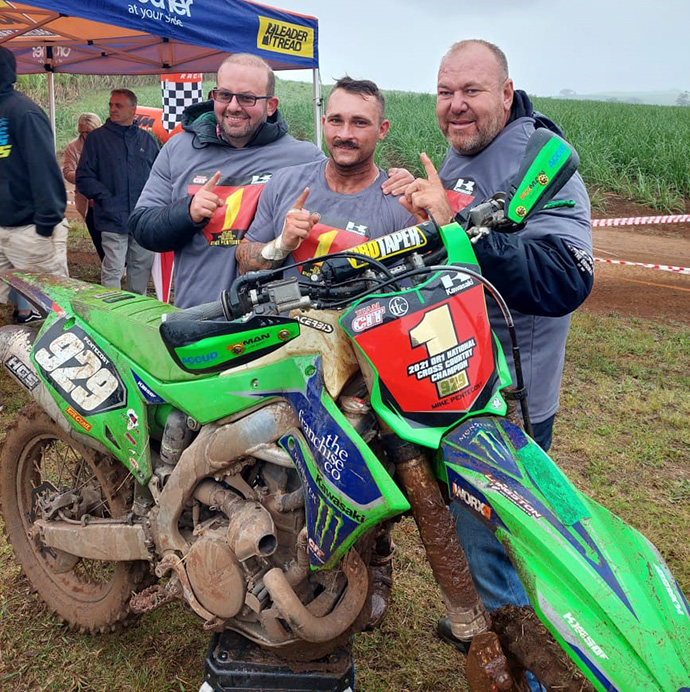 The 2021 South African Cross Country Motorcycle Championship may have been Kawasaki’s comeback year, but few would have imagined that the green machines would dominate as they did as the season progressed. It started quietly and without much expectation earlier in the year, but come championship time, not only is Kawasaki hero Mike Pentecost the 2021 OR1 champion, but he also dominated the class to take all three of the final open wins in a row. 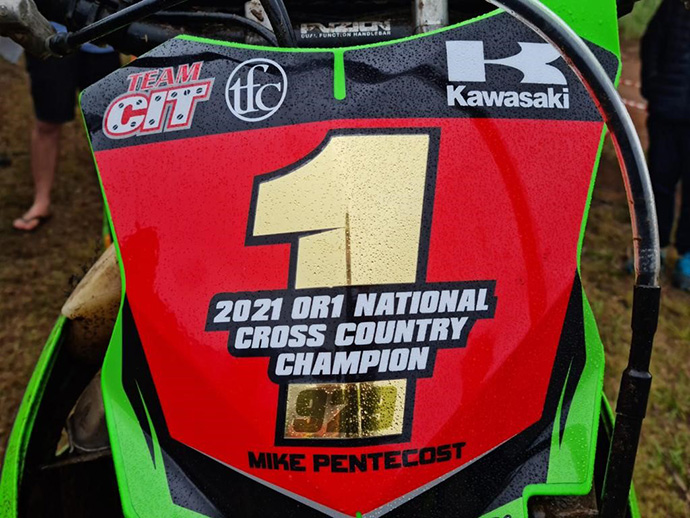 Pentecost was also the only double overall Cross-Country winner of the year as he led the way on his Franchise Co CIT Tork Craft/WORX Kawasaki KX450X in the Virgina Trials finale at Eston KZN. D’Artagnan Lobjoit added to the delight when he made it an OR1 title 1-3 on his Pepson Plastics Motul Kawasaki KX450X, while motocross refugee Wyatt Avis impressed on his Cross-Country debut, coming home fourth in Seniors in the tough KZN finale on his KX250X.

“After numerous problems, throughout the race it was touch and go then I pulled number 1 in the time trail start position draw. I had a killer time trial and won, so I was even more stressed knowing I had to open a 56 km loop with long grass and truly little else to follow,” said Mike Pentecost CiT Franchise Co CIT Tork Craft/WORX Kawasaki. 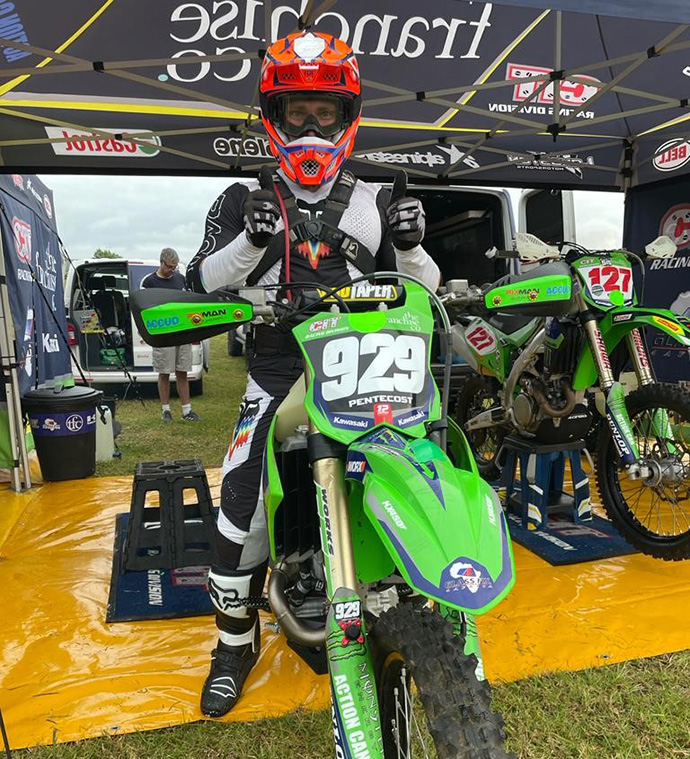 “I knew when Brad Cox caught me on the first lap that I had to push, so I just went for it. “But I bogged down on lap 2 and by the time I had the bike out the mud, I had my championship rival Brett all over me. I fought back again and opened the lead, but then I had a massive crash on the third lap and my bike was all twisted up. “Knowing it was a 10-minute DSP stop, I limped back to the pits and the guys did an excellent job straightening the bike.

“When I got going again, Brett was right back behind me “So I pushed like hell to get away! “Then my exhaust broke, and I had no power, “I was so worried Brett would catch and pass me after all that, so I pushed like hell, worrying all the way that I would burn a valve. “Yet my KX450X made it through, and I was still by a minute and a half ahead. “I had won the race and the OR1 title.

“It has been an incredible and stressful year I came back to racing with no funds and was using old parts to keep my own bike going. “By the glory of God however, I was picked up by the CiT Franchise Co CIT Tork Craft/WORX team to ride the new Kawasaki KX450X midway through the season. “And now I am champion! “I actually have no words, besides to thank my team and sponsors for an incredible opportunity. “What a fantastic day and debut national season!” D’Artagnan Lobjoit admitted. “Third in OR1 in a Kawasaki 1-3 is beyond our wildest dreams, but my Pepson Plastics Kawasaki Motul team made it happen and my KX450X ran like a rocket right through the season and across the country! “We’re not done yet — there are still two GXCC Gauteng races to go so it’s eyes on that prize. “Special thanks to Iain and my incredible team — this was a national year to remember, “said Pentecost 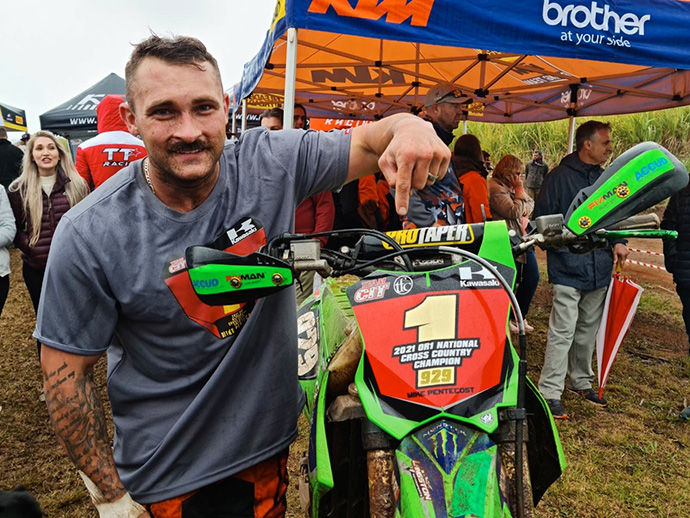 "This is just the beginning!" Franchise Co CIT team owner and manager Harry Grobler concluded. "2021 is a great foundation for Kawasaki Racing's future. We will be working hard together as two teams with one goal next year. "All our Franchise Co CIT and Pepson Plastics Motul riders will only be Kawasaki mounted in in every class we take on and we are already counting down to the new 2022 national season."

“This partnership with the Franchise Co C.I.T Off Road Team is ideal and perfect for our brands,” said Ryan Hunt, Springbok and multiple SA MX Champion, and Director of Vermont Sales. “The team has a great mix of riders, covering all the classes, with experienced team managers. Worx and Tork Craft are leading brands, and they align with the dedicated team. We have the GXCC Racing series to complete and then look forward to next season,” said Hunt. 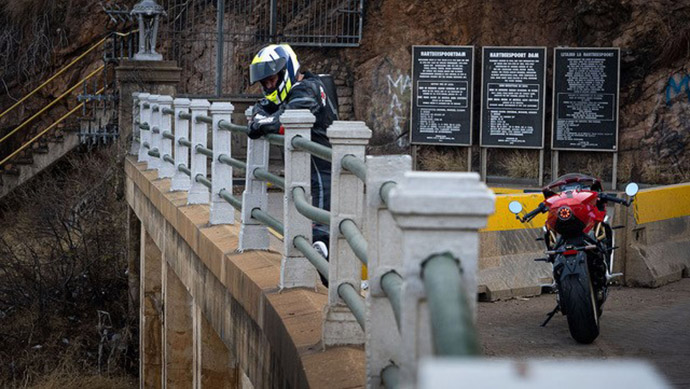 The Rotary Club of Brits Hartbeespoort is organising the Dam Bike Meander around the famous Hartbeespoort Dam on 21 November 2021.
The event is a new concept for motorcycling and stems from the club’s previous Classic Car Meander that started with just a few cars at the first event but grew to more than 100 cars at the most recent one. They have described it as something like a treasure hunt mixed with The Amazing Race, where teams will ride to various famous or historical places around the mountainous area and complete tasks. 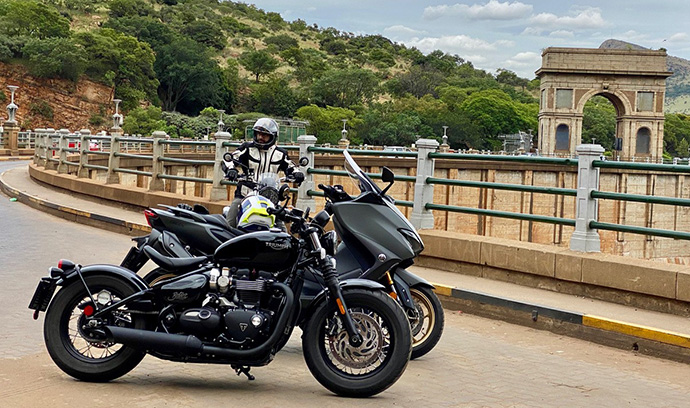 It starts at the Hartbeespoort Holiday Resort, the venue of the last Impala Rally, Rhino Rally and Pretoria Toy Run. Registration costs R130 per person and can be done either upon arrival or beforehand via the Rotary website – rcbch.org.za. Each entrant receives a free metal badge, bandana, and complimentary ticket to the famous Hartbeespoort Cableway valued at R240. Muffins and coffee will be for sale during the morning from Cafe 2 Go.
At 9 am, the event starts with the various teams each receiving their first location. Once the groups arrive at these locations, they will be given a task – these range from finding something, playing a hole of putt-putt, shooting a bow and arrow, and various others.

Once the task is done, each team will receive the following location and task. Each team will have to complete five tasks before returning to Hartbeespoort Holiday Resort. The last activity will be a slow race, and everyone is free to socialise.
Food at the venue is provided by Kuierkerk, with all proceeds going to the church. The resort will have a bar on hand together with a Coke Truck. Live music will be played by Costa until 14:30 that afternoon.
Prize giving will start once everyone has returned, with prizes going to both teams and individuals, including a raffle for a wheelbarrow of booze – tickets for the raffle go for R25 each.
Of course, as is the way with all events organised by The Rotary Club, all proceeds from the event will go towards charity – in this case, lesser privileged children.
It will be a fun day out with friends, riding motorcycles and doing it for a good cause. 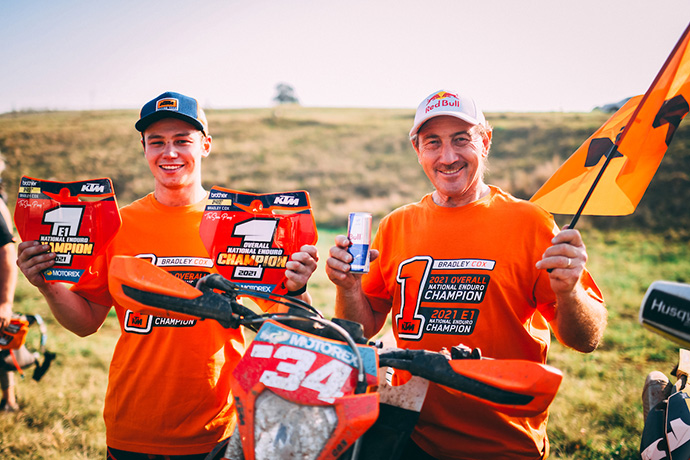 The curtains of the National Enduro Championship have officially drawn to a close. The season couldn’t have ended better for Brother Leader Tread KTM who walked away with top honours as leading rider Bradley Cox stormed to the victory overall.

The final event of the season took riders to Creighton, Kwazulu-Natal, where Cox had the home ground advantage. While the race was off to a shaky start by his own high standards, Cox held his composure to cross the finish line and officially snatch up the overall win that he had been waiting for.

“The actual race this weekend was really tough for me – I was just so nervous and so much was at stake. After a shaky start, I managed to claw my way back to finish fourth for the day - I felt so relieved to cross that finish line! I’m excited about my future in Enduro and I plan to keep putting KTM on top!” said Cox. 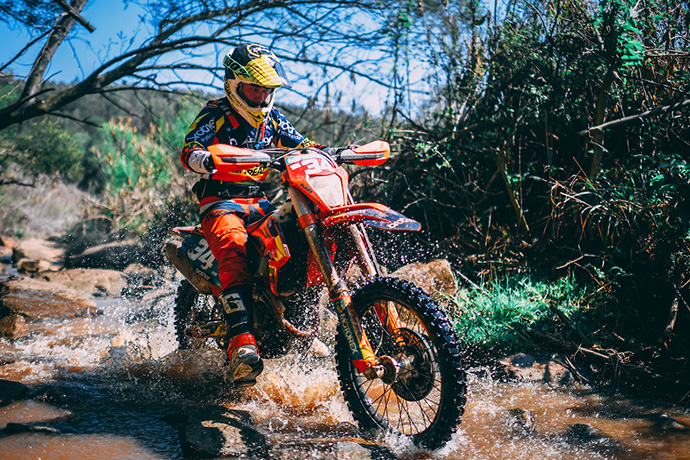 Having only started racing Enduro four years ago, Cox describes putting in tremendous work behind the scene to establish himself as a frontrunner in this sport. He added: “When I consider the fact that I only started Enduro four years ago, to achieve the overall win is really something special. It took a lot of hard work, but as I saw myself progressing over the years, I truly believed that the overall win was possible. Now I get to ride with the number one plate next year, which is unreal!”

Cox will now turn his focus to finishing off the National Cross Country Championship, where yet another overall victory looks promising for the multi-disciplined star. 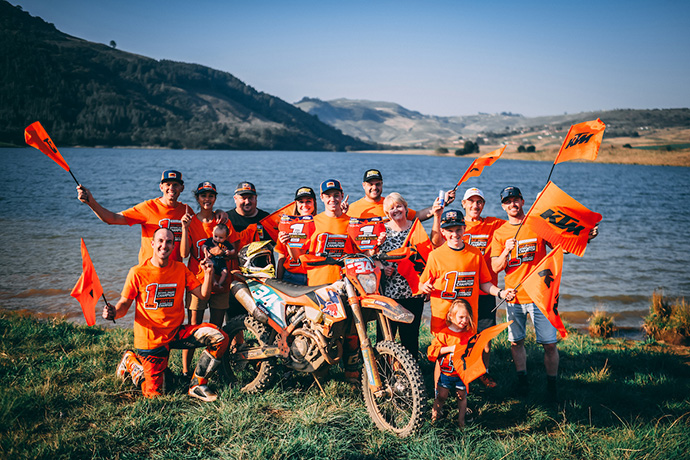 Brother Leader Tread KTM teammate Charan Moore had a solid finish to his debut season with the orange team. While the rider faced his fair share of setbacks this year, he secured an impressive fourth place in the prestigious E2 Class and sixth place overall.

Having only narrowly missed a podium spot in his class, Moore will return more determined than ever next season as he looks to shake off his rookie status in Enduro. With a wealth of experience under his belt, the rider commented: “For my first ever Enduro season, I’m really proud to have finished where I did. I also know what it takes to get to the top now. Something I really want to work on is my pace so that I can narrow the gap on the leaders in my class.” 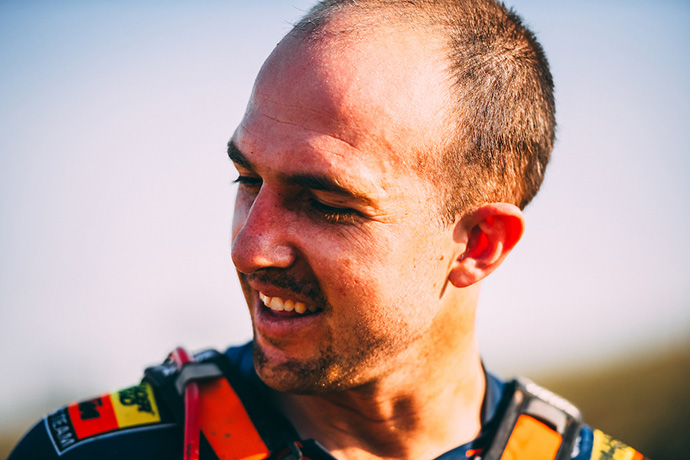 Rounding out the orange squad was Kirsten Landman, who was set to race her last national event for the Brother Leader Tread KTM team. While the Enduro queen had hoped to close this chapter on a high note, she was forced to pull out of the event due to an unfortunate illness. Landman is proud, however, to have spent the last nine years of her life representing the prestigious team and looks forward to racing for them at the Roof of Africa later this year.

As the national season comes to an end, KTM South Africa’s Marketing Manager Louwrens Mahoney commented: “I cannot be prouder of not only our riders but everyone involved in the team. It has been a long season with many of ups and downs, tears and sacrifices, but to end the season with a double championship and the number one plate makes it all worth it. The work already starts for the 2022 season as we learn from all our experiences and find ways to improve - race by race.” 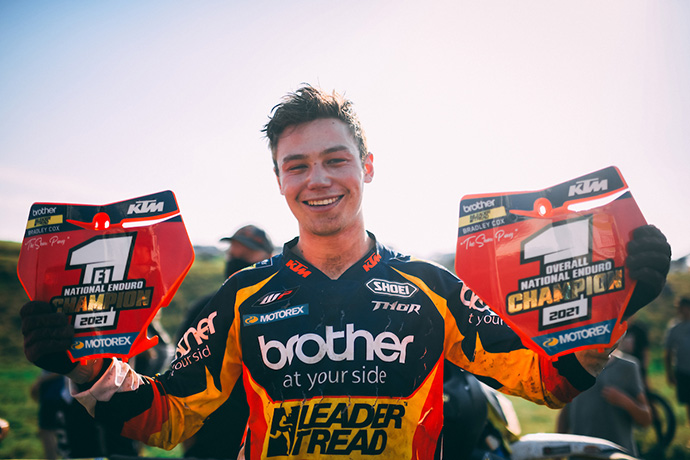