My sex life hardly exists anymore, so I've converted to Islam and changed my name too Seldom Bin Laid!

I bought some 'Jamie Oliver Sausages' yesterday. On the packet it said 'Prick with a fork'.... I thought, can't argue with that!

When cooking Alphabet Soup, don't leave it unattended, it could spell disaster.

I love that new Korean vegetarian snack pot. Not Poodle.

My mate makes crockery disappear. I said are you a wizard? He said no I'm a saucerer.

Whoever stole my trainers whilst I was on the bouncy castle, just grow up, will you!!

A man saved his girlfriend's phone number on his mobile as “Battery Low”. Whenever she calls him in his absence, his wife takes the phone and plugs it into the charger!

The madam opened the brothel door and saw a rather dignified, well-dressed, good-looking man in his late forties or early fifties.

'I want to see Valerie,' the man replied.

'Sir, Valerie is one of our most expensive ladies.. Perhaps you would prefer someone else', said the madam.

'No, I must see Valerie,' he replied.

Just then, Valerie appeared and announced to the man she charged R3000 a visit. Without hesitation, the man pulled out three thousand rands and gave it to Valerie, and they went upstairs. After an hour, the man calmly left.

The next night, the man appeared again, once more demanding to see Valerie.
Valerie explained that no one had ever come back two nights in a row as she was too expensive. But there were no discounts. The price was still R3000.

Again, the man pulled out the money, gave it to Valerie, and they went upstairs. After an hour, he left.

The following night the man was there yet again. Everyone was astounded that he had come for a third consecutive night, but he paid Valerie and they went upstairs.

After their session, Valerie said to the man, 'No one has ever been with me three nights in a row. Where are you from?'

'I know.' the man said. 'Your sister died, and I am her attorney. She asked me to give you your R9000 inheritance.'

The moral of the story is that three things in life are certain.
1. Death
2. Taxes
3. Being screwed by a lawyer

An old Italian man in Brooklyn is dying. He calls his grandson to his bedside, "Guido, I wan' you lissina me. I wan' you to take-a my chrome plated ...38 revolver so you will always remember me."

"But grandpa, I really don't like guns.. How about you leave me your Rolex watch instead?"

"You lissina me, boy!  Somma day you gonna be runna da business, you gonna have a beautiful wife, lotsa money, a big-a home and maybe a couple of bambinos."

"Somma day you gonna come-a home and maybe finda you wife inna bed with another man.

"Whatta you gonna do then? Pointa to you watch and say, 'Times up!' "?

On a bitterly cold winter morning a husband and wife in Dublin were listening to the radio during breakfast.

They heard the announcer say, "We are going to have 8 to 10 inches of snow today.

You must park your car on the even-numbered side of the street, so the Snow ploughs can get through”.

So the good wife went out and moved her car.

A week later while they are eating breakfast again, the radio announcer said, "We are expecting 10 to 12 inches of snow today.

You must park your car on the odd-numbered side of the street, so the
snow ploughs can get through”.

The good wife went out and moved her car again.

The next week they are again having breakfast, when the radio announcer says, "We are expecting 12 to 14 inches of snow today.

Then the electric power went out.

The good wife was very upset, and with a worried look on her face she said,   "I don't know what to do.  Which side of the street do I need to park on so the snow ploughs can get through?"

Then with the love and understanding in his voice that all men who are married to peroxide blondes exhibit, the husband replied,

"Why don't you just leave the bloody car in the garage this time?"

I didn't see it coming either...

It's late fall and the Indians on a remote reservation in South Dakota asked their new chief if the coming winter was going to be cold or mild.

Since he was a chief in a modern society, he had never been taught the old secrets. When he looked at the sky, he couldn't tell what the winter was going to be like.

Nevertheless, to be on the safe side, he told his tribe that the winter was indeed going to be cold and that the members of the village should collect firewood to be prepared.

But, being a practical leader, after several days, he got an idea. He called the National Weather Service and asked, 'Is the coming winter going to be cold?'

'It looks like this winter is going to be quite cold,' the meteorologist at the weather service responded.

So the chief went back to his people and told them to collect even more firewood in order to be prepared.

A week later, he called the National Weather Service again.

'Does it still look like it is going to be a very cold winter?'

'Yes,' the man at National Weather Service again replied, 'it's going to be a very cold winter.'

The chief again went back to his people and ordered them to collect every scrap of firewood they could find.

'Are you absolutely sure that the winter is going to be very cold?'

'Absolutely,' the man replied. 'It's looking more and more like it is going to be one of the coldest winters we've ever seen.'

'How can you be so sure?' the chief asked.

The weatherman replied, 'The Indians are already collecting a shitload of firewood.'

One day a father, on his way home from work suddenly remembers that it's his daughter's birthday.

He pulls over to a Toy Shop and asks the sales person,
'How much for one of those Barbies in the display window?

The salesperson answers, 'Which one do you mean, Sir?
We have:
Work Out Barbie for $19.95

Wisdom Comes With The Years...

He was sitting in his boat the other day when he heard a voice say, 'Pick me up.'

He looked around and couldn't see anyone.

He thought he was dreaming when he heard the voice say again, ''Pick me up. '

He looked in the water and there, floating on the top, was a frog.

The man said, 'Are you talking to me?'

The frog said, 'Yes, I'm talking to you. Pick me up, then kiss me; and I'll turn into the most beautiful woman you have ever seen. I'll make sure that all your friends are envious and jealous, because I will be your bride!'

The man looked at the frog for a short time, reached over, picked it up carefully and placed it in his shirt pocket.

The frog said, 'What, are you nuts? Didn't you hear what I said?'

I said, 'Kiss me, and I will be your beautiful bride.'

He opened his pocket, looked at the frog and said,

About this time of the year, older taxpayers will again be receiving another 'Winter Fuel’ payment. This is indeed a very exciting programme, and I'll explain it by using a Q & A format:

Q. What is a 'Winter Fuel’ payment ?
A. It is money that the government will send to taxpayers

Q. Where will the government get this money ?
A. From taxpayers

Q. So the government is giving me back some of my own money ?
A. Only a smidgen of it

Q. What is the purpose of this payment ?
A. The plan is for you to use the money to purchase gas and electricity...or a high-definition flat screen TV set, thus stimulating the economy

Q. But isn't buying a TV set stimulating the economy of China ?
A. Shut up

Below is some helpful advice on how to best help the U.K. Economy by spending your 'Winter Fuel’ cheque wisely:

* If you spend the money at Asda or Tesco, the money will go to Gibraltar, Ireland & Luxemburg

*If you spend it on Amazon your money will go Lichtenstein

*If you spend it on ebay your money will go Ireland

* If you purchase a computer it will go to India , Taiwan or China

* If you purchase fruit and vegetables it will go to Kenya, Spain, or Morocco

* If you give it to Oxfam 20% only will go abroad and 80% will remain in the hands of the administrators, who will spend it on fact finding missions to Cayman Islands, Thailand & Mauritius.

* If you buy a foreign car it will go to Japan, Germany, France, India or Korea.

* If you buy a British car it will go to Japan, Germany or India.

* If you pay off your credit cards or buy shares, it will go to management bonuses and they will hide it offshore

Instead, keep the money in the UK by:

1. Spending it at car boot sales

3. Spending it on call girls

5. Getting yourself a Tattoo

(These are the only UK businesses still operating in the U.K. )

Go to a night club with a tattooed call girl that you met at a car boot sale and drink beer day and night !

It’s the patriotic thing to do. 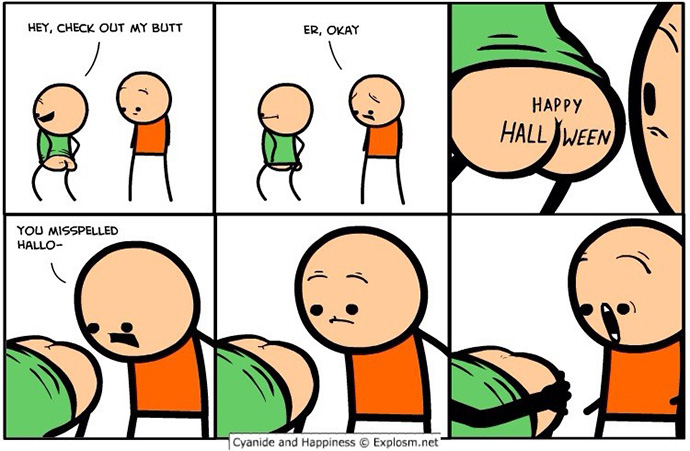 On a tour of New Zealand, the Pope took a few days off to visit the coast for some sightseeing. He was cruising along the beach in the Pope-mobile when there was a frantic commotion just off shore.

A helpless man, wearing a France rugby shirt, was struggling frantically to free himself from the jaws of a 25 foot shark. As the Pope watched in horror, a speedboat pulled up with three men wearing England shirts.

One quickly fired a harpoon into the shark's side while the other two reached out and pulled the blue semi-conscious Frog from the water.

Then, using the long clubs, the three beat the shark to death and hauled it into the boat.

Immediately, the Pope shouted and summoned them to him. "I give you my blessing for your brave actions. I heard that there were some bitter hatred between the French and the English, but now I have seen with my own eyes that this is not true."

As the Pope drove off, the harpooner asked his pals, "Who was that?"

"It was the Pope" one replied. "He is in direct contact with God and has access to all of God's wisdom."

"Well" the harpooner said, "he may have access to God and his wisdom, but he doesn't know anything about shark fishing.

Is the bait holding up okay or do we need to get another one?"