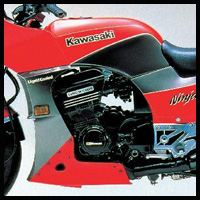 Q: Hi guys, I have a question about my beloved 1984 Kawasaki GPz 900 Ninja. Recently the bike seems to have gone off the boil, which is strange because it’s always ran perfectly, well, for a 30-year old bike that is. It’s covered only 45,000km.

When I start the bike up the whole engine sounds a bit rough, doesn’t idle correctly and splutters a bit when revved hard. I changed the plugs and fitted a new and genuine air filter but it still runs as rough as a bear’s arse, which is very annoying to say the least.

I’ve asked around at my local dealer but they’ve just filled me with horror stories from scrap it and/or sell it, to find a new engine, which isn’t helpful at all.

So I thought I’d ask you first because you seem to have a comprehensive understanding of classic motorcycles?

A: First thing to do is to check the compression by doing a leak-down test. You’ll need to find someone with that sort of equipment. That will tell you if you have piston damage or problems around the valve area. If there is leakage past the valves check out the valve shims clearance, you might have a ‘tight’ one, which will make the bike feel ‘lumpy’.

Also with a bike of this age the diaphragms at the top of the carbs can become brittle and crack over time, which will certainly cause these symptoms. If they are damaged, torn or cracked replace them ASAP. You’ll find them easily on the Internet, or maybe Kawasaki still has them?

Go through these steps first and let us know how you get on? 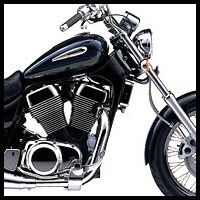 Q: I’ve owned a Suzuki VS1400 cruiser for many years and because of a recent illness I haven’t ridden it for the past five years. Don’t worry, my question isn’t about myself it’s about the bike.

I fitted a new battery to start my 1400 once more and then hopefully go out for a long awaited ride. I also drained the tank and took out the stagnant fuel, and cleaned the spark plugs. Surprisingly it started quickly but then things went downhill. There was a lot of coughing and spluttering and the bike suddenly backfired and stopped and a weird smell came out from the exhaust pipes.

So I took off the air-box cover to have a look inside and discovered that half of the old and perished air-filter had been sucked into the motor, which I presume isn’t too good! I managed to get the intake rubber from the carb on the front cylinder off and it was full of the stuff. The rear carb looks like a nightmare to get to also so I left that for a while.

So what’s my best plan of attack folks, to get my 1400 back on the road to freedom? I don’t have a workshop manual and no one seems to have one either. All your help will be greatly appreciated…

A: If you go onto the Internet you’ll be able to download some sort of workshop manual for this bike, so you might need a younger person to help you with that.

But that’s not the problem here because this is one ‘pig’ of a job you have ahead of you. Firstly, the carbs will be full of sticky unleaded fuel residue (and filter bits), which needs many hours and patience to remove, using many tins of carb cleaner. Make sure you take out every jet, clean every air passage, etc, and you’ll probably need to find an airline to blow it through.

However the rear cylinder carb is really hard to get at and you’ll need to dismantle half the bike to get to it – it sits below the seat and way down inside the frame rails. Once you’ve done all of this, and sworn a lot, you’ll have to synchronize the pair of them using the two connecting cables, so don’t leave them off or unused or it’ll run horribly lumpy, for the want of a better word.

So yes, you will need a manual, or maybe take it to your closest Suzuki shop instead to be sure, but the labour bill will not be cheap I’m afraid because of the amount of work involved. 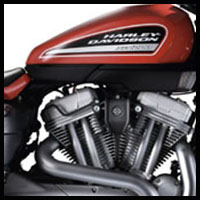 Q: I own a Harley-Davidson XR1200, which is now standing very quietly in my garage, which is a little sad to say the least. I was out the other day and revving it hard when there was a sudden jolt and a ‘pop’ came out of the air box and the XR came to a holt. It did fire up again but sounds very rough as if a cylinder had gone missing. Before I take it to my local, and very expensive dealer, I thought I’d run it by you guys so I can tell them what the problem is and not what they say it is and hopefully keep the repair bill to a minimum? Thanks for your time and waiting urgently for a reply? Gert A: First of all I would say someone has fitted a H-D race tuner and increased the rpm rev-limiter at some stage, because this is a common practice with this particular bike. On the camshaft is a key that holds the cam onto the cam drive shaft, which I would suggest has sheared. This will throw out the cam timing and bend one of the valves, or even more! So, it will mean the ‘heads have to come off and the camshaft drive needs to be repaired as well. Unfortunately it’s not going to be a cheap repair job to say the least – sorry man… 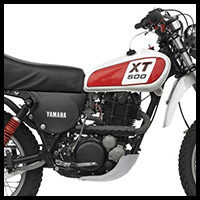 Q: We (as in my mates and I), all have old Yamaha XT500 singles in various states and conditions. We all sit down and talk about them over a beer or two and even though they’re old and relatively slow compared to today’s bikes we all still love the ‘rawness’ of an old air-cooled single with a kick-start, until it slaps the back of your leg and leaves a bruise the size of the moon!

As a rule all of our bikes are reliable except for a few spitting plugs out of the head and having to heli-coil them, and minor stuff like that, but I do have a question to run by you guys to see if you can shed a bit of light on this irritating subject.

Most of us have re-bored the motors with new rings and pistons and fitted new valve guides and seals and gaskets, to see if we can stop excessive oil use. As you know the oil is filled by putting it into the top frame rail but even after a couple of days of riding, mine especially, has dropped more than I thought it should. But there seems to be no smoke coming out of the exhaust pipe, or indeed any oil leaks from anywhere, pointing to why it’s dropped.

So do you have any idea where the oil is ‘going’? It would make a great talking point the next time we all meet, and thanks for a great site (best in SA by far), because we all log on daily for Bill’s silly, but entertaining, comments.

A: Bill says he had the same issues in England when ‘they’ all used to tear around on these bikes, and eventually they discovered in was in fact the bike’s oil pump at fault, which is interesting.

The oil pump sits at the bottom of the frame rail that holds the oil with no valve, of some sort, in-between. When the internal vanes wear, over time, the oil from the header tank seeps past the pump and straight into the crankcase, so check the level in there to see if the level inside has risen before you start the engine over night, to confirm this?

It can’t harm the motor unless the crankcase becomes over-full, which can obviously affect the seals in that area. So, if you guys want to keep the oil use back to original go and buy a brand new original oil pump and your problem is cured, simple as that. And yes, any Yamaha dealer can still get those parts for you.