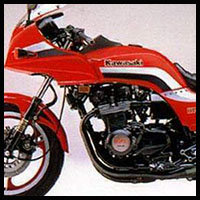 Q: I’ve just been reading about this recall on Yamaha’s ‘super-fancy’ R1 regarding gearbox issues. And this is why I’m writing because my old 1983 Kawasaki GPz1100 also has very irritating gearbox issues as well.

Yes, I know it’s an old bike with 85,000km thrown through the motor but the problem gets worse by the day. First gear is OK but when I go into second it always jumps out and scares me! If I change gear slowly, it’s not too bad. The gear linkage was all ‘sloppy’ so I had new bushes and things made to make it like new again, but it hasn’t really cured the problem. I can hold it in gear but I’d imagine that’s not a good thing to do.

So, you clever guys, what are my options here because I believe parts are very scarce for this particular model?

A: I wouldn’t worry about parts because Kawasaki are very good with spares for their old models, like this, or you’ll find them on the internet somewhere.

But the problem lays with the selector dogs on the second gear and the slots they go into on the accompanying drive gear. They ‘round-off’ over time, and consequently jump out when engaged and cause this problem.

So you now have two options. Buy new gears and install them, or source a complete second hand good condition gearbox for this model. Or, take out your existing gears and find a reputable engineer than can undercut your old gears, but make sure they know exactly what they’re doing or you’ll have to go through the process all over again!

Either way you’ll have to remove the motor and split the crankcases to repair the gears, so make sure you’re up to that task also, or take it to a Kawasaki dealer, which will not be cheap, obviously. Hope this helps? 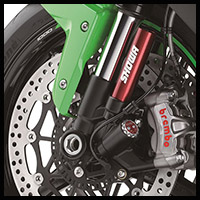 Q: Hi guys, just a quick one. What’s with all these ‘funny bottles’ appearing on the fork legs of modern bikes, specifically the new Kawasaki ZX-10, and the much-anticipated all-new Suzuki GSX-R? Also, every World Superbike and most certainly all Moto GP bikes seem to have them as well.

They also seem to have different length or sizes, so why is that as well? I’d like to know so I can tell all my mates that I pretend to know everything.

A: They’re called ‘accumulators’ and they hold gases or fluids that drastically improve the damping capabilities of the front fork. What they basically do is to make the front fork work like the rear shock to put it into simple terms. But they do cost more, which is why the bike carrying them will undoubtedly be more expensive.

The different shapes and sizes will alter the damping rates for different tracks and surfaces. And, there’s a big reason for these appearing on new bikes – they work and vastly improve the front-end feel and grip of the bike – if you can ride fast enough to appreciate them that is! 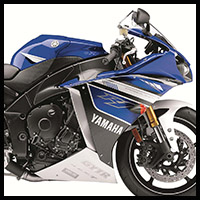 Q: I’ve had a 2013 Yamaha R1 for a year or so now with no problems, obviously until now or I wouldn’t be sending this mail.

I went out for along ride, 200km +, the other day and came home with a sick bike that sounds really rough on idle and doesn’t pick up cleanly anymore. I changed the plugs, which wasn’t easy, in case that was the problem but the annoying ‘roughness’ remains.

So basically please help and tell me what to look for next?

A: Let me first ask if you did a ‘violent’ down shift at any time because this could point to the problem? And if I were you, DO NOT start the engine again until you do exactly as I say Colin!

Find someone with leak-down testing device and check the compression on all four cylinders and make sure they’re all within factory tolerances, very important this, because it will tell you if you’ve bent a valve or two?

My suspicions are that this is the problem here because I’ve seen it already with this particular engine. If you keep trying to start the engine, if this is the case, you’ll do even more internal damage. And if there is a ‘dropped’ valve or two, which the compression test will tell you, you’ll have to pull off the head and repair the damage, which won’t be cheap depending on how bad it is inside. Sorry mate for the bad news – go have a beer or twelve. 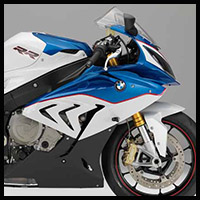 Q: I’ve recently been reading about these new fancy quickshifters, especially the ones found on BMW’s S 1000 RR superbike and their new S 1000 XR.

And my questions are, do we actually need these things seeing as every old race bike never had these fitted and still lapped ridiculously quickly? And, more importantly, do ‘they’ eventually damage the gearbox and its surrounding parts? Some people say yes to this but of course BMW sales personnel say no.

So please tell me your unbiased opinion on this interesting subject of footless gear changing and I’m looking forward to your response – keep up the good work on the best site in SA as well folks.

A: As a rule quickshifters are primarily designed to shave a few moments of time from your lap times at a racetrack, because one tenth of a second can win you a race, right? But nowadays it seems they’re creeping into road bikes, which in my opinion they don’t really need. But like traction control, ABS, electronic suspension modes, power modes, and, and, and..  They seem to be what people want, but these modern additions do push prices through the roof.

As for gearbox damage over time, if an ‘aftermarket’ one is fitted to bike that wasn’t installed at the factory and the delay time that cuts the ignition isn’t set correctly it will eventually cause damage to the selector dogs, shifter forks and selector drum – I’ve seen it many, many times and people look puzzled when they’re handed a R10,000 plus bill! Don’t forget they’re supposed to work at full throttle at not at a few thousand rpm around town, which people seem to forget.

On the other hand, like the new BMW XR for example, the gearbox will have been designed by BMW with the quickshifter as part of the design thesis and therefore all components will work efficiently together, otherwise there would be an enormous amount of warranty claims, right? So if it’s a genuine factory installation you don’t really have to worry – but I can’t predict what happens many years later?

Hope that’s put your mind at rest Gareth and thanks for the compliments.