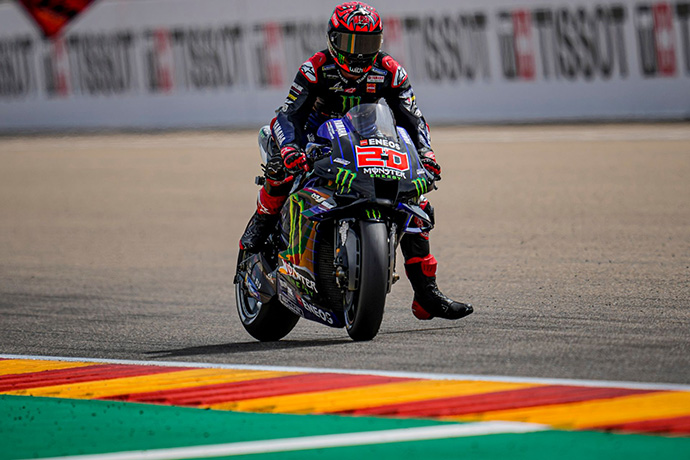 The Monster Energy Yamaha MotoGP Team have travelled straight from MotorLand Aragón to the Misano World Circuit Marco Simoncelli for the first of two races held at this track this season (Round 14 and Round 16). It will be a special event, as Franco Morbidelli will be reunited with former teammate Fabio Quartararo, this time in the Factory Yamaha pit box.

Fabio Quartararo is determined to put his mark on the upcoming race at the Misano World Circuit Marco Simoncelli after a disappointing end to the Aragon GP. He enjoys the San Marino track and is feeling positive about his potential here this weekend.

The Frenchman is leading the championship with a 53-point advantage over his closest rival. Whilst he doesn‘t bother about the standings too much, his goals for this weekend do include a visit to the San Marino rostrum again. He stood on the podium there once before when he scored a second place in the MotoGP class in 2019, and he also came close last year when he took a fourth place in the Emilia Romagna GP.

The San Marino race weekends are always special to Morbidelli, especially because he rode his very first Grand Prix at the Misano circuit in the Moto2 class in 2013. This time round the San Marino GP will be even more special, as he will make his highly anticipated comeback after injury as well as his Monster Energy Yamaha MotoGP debut.

The Italian opted to have surgery on his knee on 25 June. Following a rehabilitation programme, he is now ready for action again. However, the recovery process did mean he missed five race weekends (the Dutch GP, Styrian GP, Austrian GP, British GP, and the Aragon GP). He is currently in 17th position in the rankings, with a total of 40 points.

The Misano circuit, constructed in 1972, was a regular scene for Italian Grands Prix throughout the 80s and early 90s. The 4.2 km track is ridden clockwise, since a radical renovation was done to meet MotoGP's safety regulations in 2007 that put the circuit back on the MotoGP calendar. The upgrade also included a new chicane, resulting in the current lay-out of six left and ten right corners, and giving the track increased race excitement.