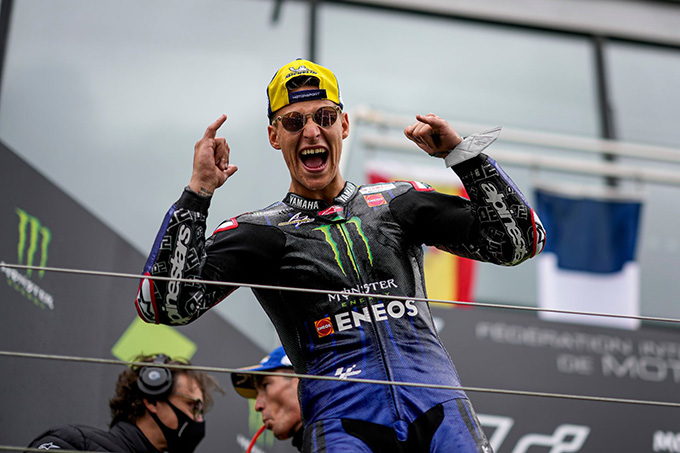 Fabio Quartararo secured his fifth victory of the season with a commanding performance at Silverstone in the British Grand Prix. His Monster Energy Yamaha MotoGP team-mate Cal Crutchlow rounded out the Grand Prix in 17th place with PETRONAS’ Valentino Rossi and Jake Dixon in 18th and 19th places.

Starting from third on the grid, Fabio Quartararo settled into fourth place in the early stages of the 20-lap British Grand Prix. After topping the free practice sessions, the Frenchman knew he had good race pace and quickly made his way past Francesco Bagnaia, elevating himself into third place before setting after the leading duo. After clocking the fastest lap of the race, Quartartaro passed Aleix Espargaro for second before making an assault on the leader just a lap later. From there the 22-year-old never looked back, setting further fastest laps of the race, he extended his lead at the front to over three seconds – eventually finishing the race in first place with a 2.663s advantage.

Quartararo’s Monster Energy Yamaha MotoGP team-mate Cal Crutchlow enjoyed his home Grand Prix weekend with the factory team. The British rider made progress throughout the weekend and finished the race in 17th.

Valentino Rossi finished the Grand Prix in 18th place. The Doctor had a strong start to his race, settling into sixth from his eighth-place grid slot. Holding onto a place in the top-ten at the midway stage, he ran into grip issues which saw the Italian slowly slip through the field, eventually finishing the race in 18th place ahead of rookie PETRONAS Yamaha SRT team-mate Jake Dixon.

Dixon had a strong MotoGP debut as he deputised for the injured Francesco Morbidelli. The British rider made progress in every session and enjoyed the 20-lap race in which he finished 19th, 50 seconds adrift of first.

Today's win extends Quartararo's lead in the championship standings to 65 points, with a 206 points total. Monster Energy Yamaha MotoGP stay in first place in the team standings with 301 points. Yamaha climbed up to first place again in the constructor’s championship with 234 points.

The Yamaha MotoGP teams will be back in action in two weeks' time at the Motorland Aragón circuit for the Gran Premio de Aragón.

Fabio Quartararo – Monster Energy Yamaha MotoGP, 1st
“This win felt great! In Austria I was thinking of the championship when we were switching bikes, but here I thought of nothing. I was feeling great on the bike, and I enjoyed fighting for the victory. It was perfect. I enjoy racing like that, living in the moment. I felt great at the start and stayed calm. I only made a few mistakes, and I felt like I was really good on braking. It was better than expected, and because of that I had kind of a change in strategy during the race. When I had a 3s lead I said, ’Okay, now it‘s time to go slowly and not make any mistakes‘, and then on the last lap I was just enjoying the track, still riding slowly. I‘m so happy about this result. It‘s a really special win. When I won in Assen, I already had some fans there. I don‘t know how many fans there were here today, but it was massive, and it was great to share this moment with them. I want to thank them. For a Monster Energy Yamaha MotoGP rider, it‘s always nice to win a Monster Energy Grand Prix, so I basically got it all, it‘s amazing! It‘s a great win for them, and also for my family and the team. I have a mechanic who couldn‘t come here, Daniele Grelli, so this one is for him. I can‘t wait to be with the crew to celebrate.”

Cal Crutchlow – Monster Energy Yamaha MotoGP, 17th
“I did enjoy the race. Obviously, I'm disappointed about where I finished, but overall I was pleased with my performance and pleased with the lap times I was doing. We came here to do a good job, and I feel we did that. During this weekend we worked in a great way with the Monster Energy Yamaha MotoGP team, but I just started too far back. It was as simple as that, because I felt that I had a bit of a better pace to run with the guys nearer the front. In the mid-race I was quite pleased with my pace. It was probably a little bit faster than the pace I was doing over the weekend, so I stayed consistent. We saw a lot of guys dropping with the tyres, which we knew would happen. I was in the exact same boat with the rear tyre, but I was able to manage it well, which was quite pleasing. Overall, to be racing here in Silverstone in front of the home fans, I got great support. I'm glad they got to see three great races today. We can go away from here proud about our weekend.”

Valentino Rossi – PETRONAS Yamaha SRT, 18th
"It’s a great shame because I felt good with the bike all weekend and I was quite fast. I had a good start and good first laps; I was in a place where I could fight. However, after six laps I had problems with the rear grip, which made me slow. This sometimes happens to us and we tried a lot of things, but in the end we couldn’t fix it. I think if the temperature was a little higher than I could have used the hard tyre and we are normally better on that, but I was cold so we had to use the medium. It’s sad because I wanted to have a decent race here at Silverstone, as there is a big crowd. I want to thank them all for their support. It has been a great pleasure to ride here with so many people here all weekend and thank you everyone for your love over the years."

Jake Dixon – PETRONAS Yamaha SRT, 19th
"I felt good all weekend and felt really strong today, especially in morning Warm Up. The pace I had, I felt like I could stay with the guys in the back group. In the race I didn’t have the same feeling and the grip was different. It’s a bit frustrating. It was a great experience, although I wanted more from the race. The team did a great job and we made improvements during the weekend, but the race was out of our hands. I feel like I’ve done a good job; I was two seconds off the top guys in Qualifying after only a small number of laps. I can’t thank the British crowd enough, the cheers were fantastic every lap and it was such a nice feeling. It was so nice to see a packed out crowd at Silverstone and the atmosphere was sensational. It was an incredible feeling."