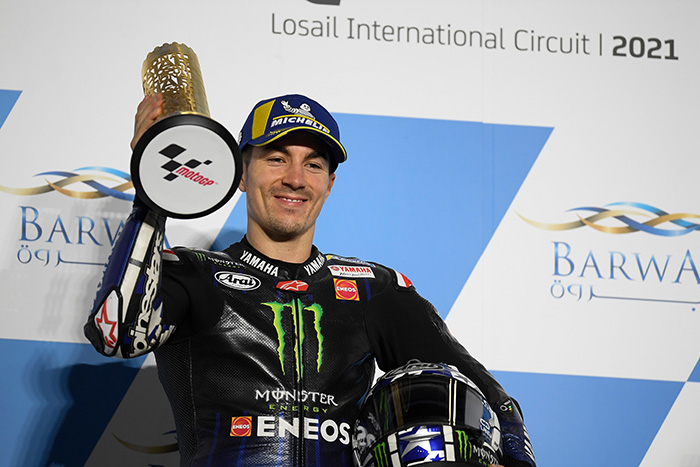 The season opener got going at a blustery Losail International Circuit, with Maverick Viñales claiming his first win at the Qatari venue since 2017. Team-mate Fabio Quartararo had a fast start to the 22-lap race but ultimately slipped to fifth position in the closing stages.

From the front row, the factory pairing slipped to fifth and sixth positions after the start, but quickly found their rhythm as they began their attacks. It wasn’t long before the duo started making progress, with the factory Yamahas clearing Ducati’s Jorge Martin on lap three. With the podium positions already in sight, Viñales upped the pace, setting the fastest lap of the Grand Prix on lap four. Tag-teaming with his French team-mate, the pair set after Jack Miller, who was the next target in third place. The pair wasted no time in dispatching the Australian as they continued their charge towards the front of the field.

It wasn’t long until the leading Yamahas swapped places, as the experienced Spaniard got the better of 21-year-old Quartararo at turn 11 and immediately set off after the leading Ducatis, a quest he completed by lap 15 as he hit the front of the race.

From there, it was a masterclass from Viñales, who controlled the pace with the softer Michelin rear tyre, opening a comfortable one-second advantage over the chasing pack. The nine-time premier class race-winner didn’t look back, taking an emphatic victory under the lights. Meanwhile, Quartararo had slipped to fifth place as he battled with Suzuki’s Alex Rins throughout the closing stages of the race. The Frenchman held on to complete his factory debut rounding out the top five.

Petronas Yamaha SRT got their 2021 season underway with Valentino Rossi and Franco Morbidelli finishing the 22-lap Grand Prix in 12th and 18th places, respectively. The Doctor got his 26th Grand Prix racing career going with a bright start, although slipping to seventh, the 41-year-old stuck with his Yamaha counterparts before dropping further through the pack. The Italian recovered to take 12th place after losing a handful of positions after being forced wide at turn one mid-way through the race. Rossi’s countryman Franco Morbidelli suffered a technical failure on the grid but chose to start the Qatar Grand Prix to collect as much data ahead of round two next weekend at the same circuit.

Viñales’ victory awards him 25 World Championship points and puts him at the top of the standings, while Quartararo sits in fifth 14 points adrift. Rossi collected four points in his SRT debut, whilst Morbidelli missed out on a point paying position. Yamaha and the Monster Energy Yamaha MotoGP team also lead the constructors and teams’ championship with 25 and 36-point totals after Round one.

The MotoGP paddock will have a few days rest before roaring back into action for the second visit to the Losail International Circuit for round two of the championship.