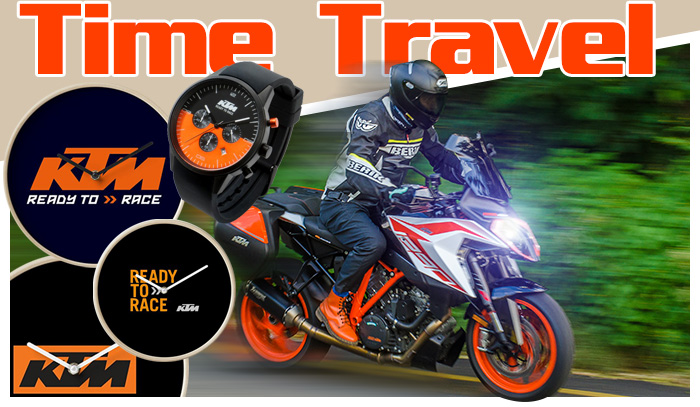 I don’t think I’ve ever ridden any motorcycle that seems to compress time as much as this spectacular KTM GT. No matter what time you leave to achieve anything, from shopping to touring, to even a quick rasp around the block, you always seem to get there quicker than you estimated, a trait that the KTM 1290 Super Duke GT proudly emits ten–fold. KTM have generously given their GT a moniker that I haven’t heard of before, called Advanced Sport Touring. I’m still not quite sure what that means, even after a bag of garden herbs, but I agree with the plethora of attributes the GT has to offer.

Firstly, it’s fast, very, very fast! Secondly, it’s riddled with fancy components and the usual wealth of electronic gadgetry, which is compulsory on any ‘touring’ bike in the 2020s, right? If you’re wondering how fast, the GT will easily surpass 270km/h, even in your Grandma’s hands, well possibly not, but all you need is enough room and bravado. Now here’s the thing; in Europe or the like, there’s a chance you’re going to lose your license due to its ‘time travel’ abilities. However in South Africa we have a more liberal attitude towards speed, if you know what I mean, without ‘hanging’ myself? So I believe the mighty 1290 GT is perfectly suited and maybe even designed for our speedy roads, just a thought?

To get you to these ‘cell-for-the-night’ speeds is the monster 1301cc, 75-degree, V-twin from the Super Duke, which has now been planted into this second-generation GT. I must admit I wasn’t really a fan of the first GT version for many reasons, but this update has certainly reversed my first chilly and unpleasant dip into the GT waters. This Super Duke engine has now punted the power output to a remarkable 160hp at the wheel and 127Nm, with the RAD installed Akrapovic silencer and link-pipe. Now that’s about the same as Suzuki’s Hayabusa from a ‘mere’ V-Twin, in case you’re wondering.  Over 100Nm is yours from the moment you open the throttle with the biggest surge coming from 6,000rpm, until the rev-limiter appears at 10,300rpm. What this means, in madness terms, is that the 1290 Super Duke GT is THE best ‘touring bike’ to pull enormous wheelies with, tremendous! 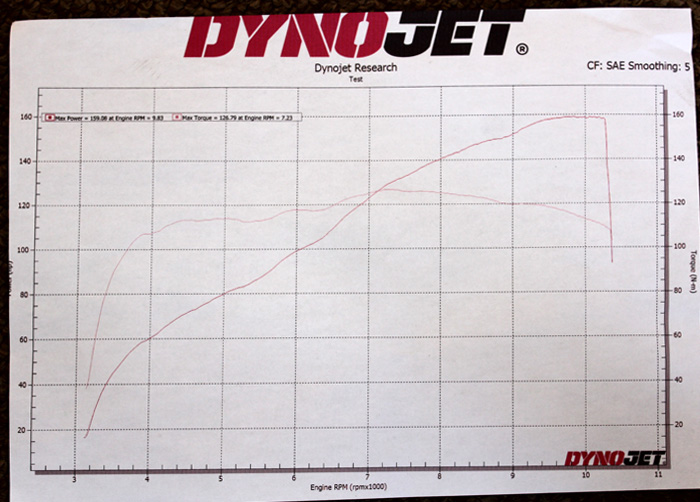 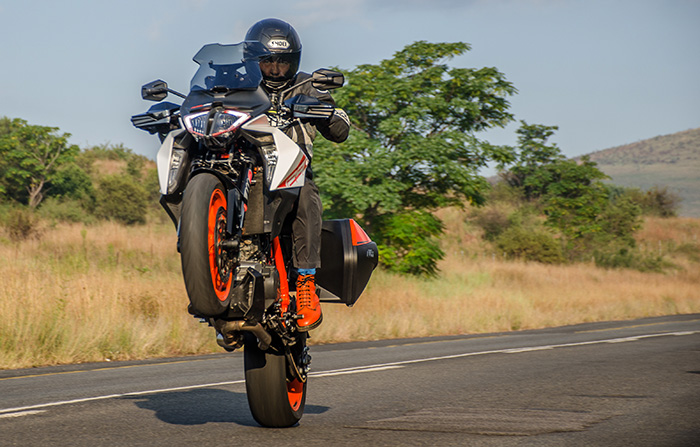 All well and good but without a chassis to contain the vibrant power delivery it all becomes a bit pointless. Fortunately, the GT has no such problem and even a quick visit to the racetrack is well within its capabilities due to its 209kg (dry) displacement. I found the previous version to be a bit lame in the electronic suspension department, as in it didn’t really work correctly. That has now changed as the 2020/21 model has the best semi-active WP units I’ve felt from the KTM stable. A quick jab on the left side switchgear is all you need to set your preference, or to add extra damping for a pillion rider, which KTM proudly says the GT is designed to carry, for a change. Everything you decide to change is perfectly relayed to the rider through KTM’s 6.5-inch TFT display, which I’ve always enjoyed on their Adventure range, so nothing to report there.  In fact there’s so much to ‘fiddle’ with on the GT it becomes a little boring, for you and myself, to read and/or write about. So just go to www.ktm.com and you can absorb all that technical stuff in your own time.

One thing that isn’t so easy to absorb is the styling, because some people love its dramatic looks and others do not, usually those negative irritating BMW GS dudes, which isn’t surprising. Strangely the famous pop group from the UK called Erasure has a couple of lines from one of their classic hits that sums up the GT. It goes something like this; “love and hate what a beautiful combination, sending shivers up and down my spine”. I couldn’t have put it better myself and I’m a big fan of its styling that turns heads wherever you ride with this marvelous orange/white paint scheme. 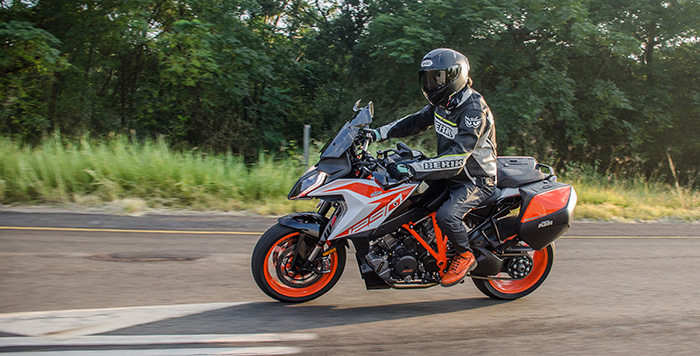 Another visual attribute of this GT are the panniers, things I normally hate sticking out in the wind like Dumbo’s ears (a Disney cartoon elephant if you didn’t know, unless you’re as old as myself). Anyway, these panniers actually suit the GT and enhance the touring attributes in a fashionable manner, useful too. Sure, it does make the arse end of the GT feel as wide as an American shopper, but you never feel them affecting stability like some tend to do, unlike the hefty and wobbly shopper threading through the Walmart aisles.

So are there any ‘real’ faults with the GT, you ask? Well no, but if I had one minor issue I’d like the ‘bars to be flatter rather than the ‘race like’ curve pointing downwards towards the ends, but that’s an easy swap, and probably just me. One thing that did creep into my mind though is KTM’s 1290 Adventure S; a superb bike on all counts as well but why not buy the R with its off-road ability? The S has road wheels, like the GT, so if you’re never going to go off-road then the GT is the far better option, so there. Just putting that out there and looking forward to abusive e-mails from S owners, please send them to ireallydon’This email address is being protected from spambots. You need JavaScript enabled to view it..

To be honest the GT is my personal favorite of all the 1290s, possibly due to its wild but civilised nature, a hard package to achieve. And RAD offers you a superb package in the form of the panniers and Akrapovic parts I mentioned earlier. Oh yes, a 2021 GT will cost you R300,000 in basic form with none of these parts but, on the other hand, RAD has 2020 models (100% identical), with the exhaust and panniers fitted for a only R290,000 (parts worth well over 25K), now that’s an awful lot of motorcycle for that price in anyone’s books, right?Go to www.radmoto.co.za (011 324 5007) to book a highly recommended test ride and to enjoy a very exhilarating experience. 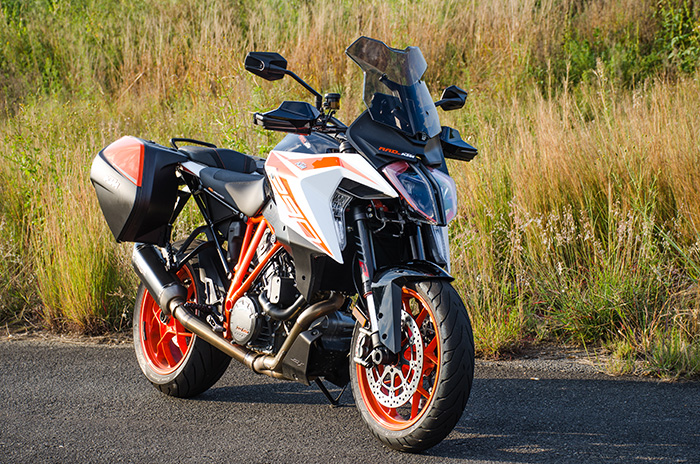