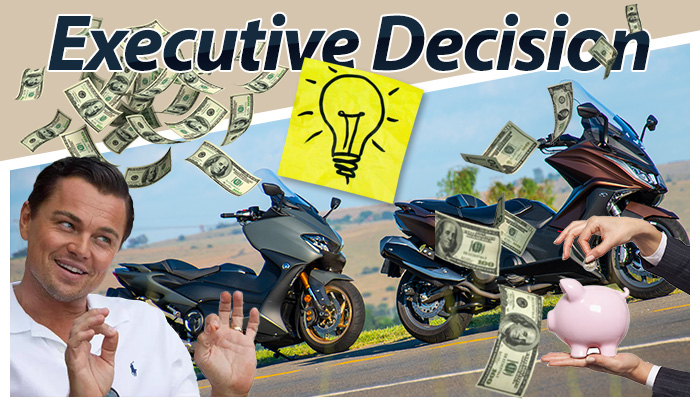 I love South Africa for so many reasons, but the general motorcycle populations do tend to rub me in the wrong direction. Nothing to do with anything more than the total lack of respect for these big or maxi-scooters, as they’re called around Europe and other large expanses. Sorry if I’ve offended anyone, maybe?

If you haven’t ridden one, then you have absolutely no idea what you’re missing. Don’t think of these as mere ‘scooters’, because they’re automatic motorcycles, as I like to call them. There is a reason why automatic cars outsell manual versions; easy to use and live with is the answer to that and this is why this pair are so fantastic.

I had them for a week and never went anywhere near any of the other ‘motorbikes’ in my garage. Just ‘twist-and-go’ on your way to an indicated 170-180km/h, how cool is that? They also have top class suspension, tyres, brakes and fancy electronic equipment, so take some of that in your morning coffee. But enough preaching about the delightful attributes, let’s get into the internals that makes these so special and superior.

Seeing as they’re similar in the spec department the equipment levels are not. Quite simply the Yamaha has more, sort of. If you’re into touring, which both units achieve commendably, the Yamaha wins. If you prefer a ‘sporty’ ride then the Kymco lifts the trophy. The T-Max Tech MAX wins with creature comforts by having a softer ride, heated seats, heated grips (three levels on both), and a very efficient electrically adjustable screen, the Kymco can only offer heated grips in that department. However the Kymco AK550 has a unique Noodoe interface by downloading the app. to your phone. Then Bluetooth them together and you have instant GPS in the middle of the one, not two, but three LCD screens. The TMAX on the other hand has to have a separate GPS unit, and then you’ll have to find somewhere to mount it. 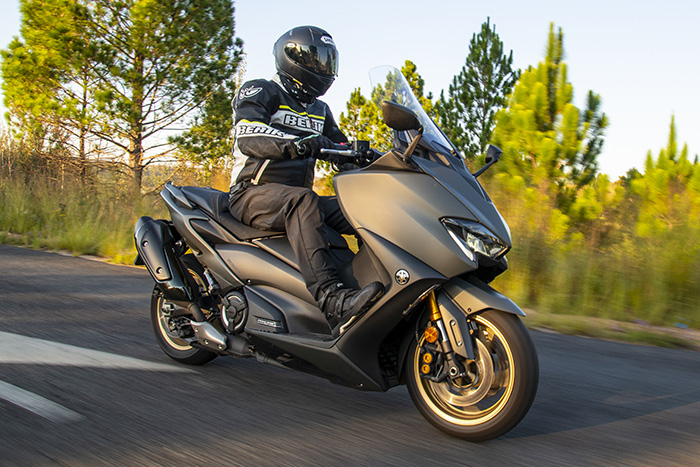 The TMAX Tech Max does have analogue style clocks that are very classy to say the least, with a LCD screen in the centre depicting the usual information, like consumption figures and the like. Talking of which both seem quite economical seeing as you tend to put both into full power modes (they have rain modes as well), and the 15-litre tanks will take you into the distance for quite a while. I didn’t record any exact figures because I didn’t care as I was in comfort heaven on this pair. Big fat seats, metres of room to stretch your legs as well, what more can a commuter/tourer ask for? 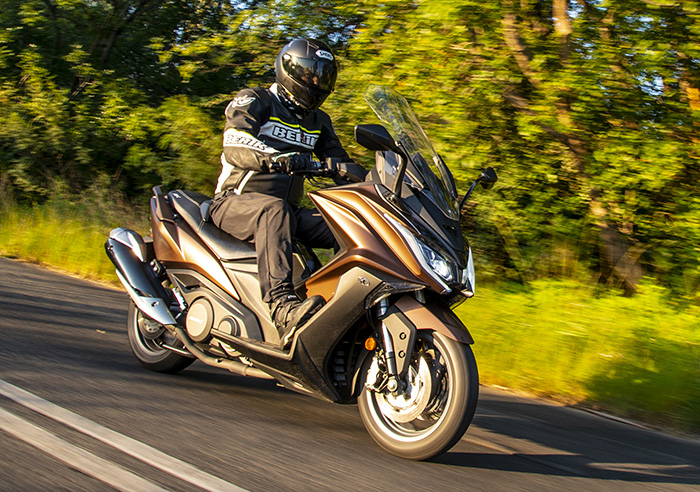 If you prefer sport to touring the AK550 certainly has the firmest suspension and the best brakes as it's retarded by twin Brembo radial calipers up at the front, very nice indeed. The Yamaha has ‘R1’ calipers but they’re not as crisp as the AK’s set up, still brilliant though. Either way these maxi-scooters can be ridden in an exciting manner and chasing other motorbikes on the road becomes a compulsory act, and tremendous, mischievous fun. So, finding out how fast, instead of guessing, had to be done with our Racelogic GPS testing module. Don’t forget our Jo’burg altitude of around 1500m will sap power to around15% +/-, so if we were testing at sea level the figures will be a little quicker and faster, obviously. Anyway, here they are…

As you can see no two bikes have ever been so close, so there’s no advantage regarding performance, except the TMAX was a little bit quicker around the 50-70km/h range, which did show when we raced them. After that they both sat next to each other on their way to over an indicated 170km/h on the clocks. They will go faster on a longer run but we ran out of space just after 1km. Either way they’re both more than quick enough to dispel traffic and cruise forever way past 120km/h, with no arse or leg fatigue, which I must enforce once more. These things are THE most comfortable forms of two-wheeled transport you will ever come across, so there, and the most smile inducing. There’s also something impish about riding around with t-shirt, slops and shorts only, irresponsible yes of course, but so satisfying.

So, by now you might be more interested in this pair but the prices are high for a ‘scooter’ you say. But I disagree because they offer so much more and quite possibly the best form of personal transport money can buy. 280,000+ TMAX sales since its conception in 2001/2 just can’t be wrong! Not here though I’m afraid, but like I said do not underestimate these machines in any way, I’m in love and will buy one, one day?

So, which is my ‘Executive Decision’ to buy? That is easy, the AK550. It’s a bit lower in the saddle, sounds better, and has that superb Noodoe interface, Brembo brakes and looks superb, not to mention the 60k price difference. On the other foot the TMAX Tech MAX offers unsurpassed touring abilities and a lap of South Africa is well within its limits, and that includes taking a pillion along. Now get out and try one, you’ll be as impressed as I was, guaranteed. 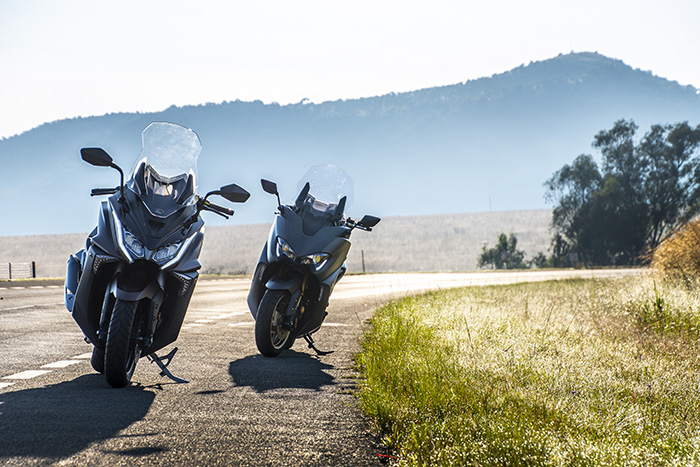