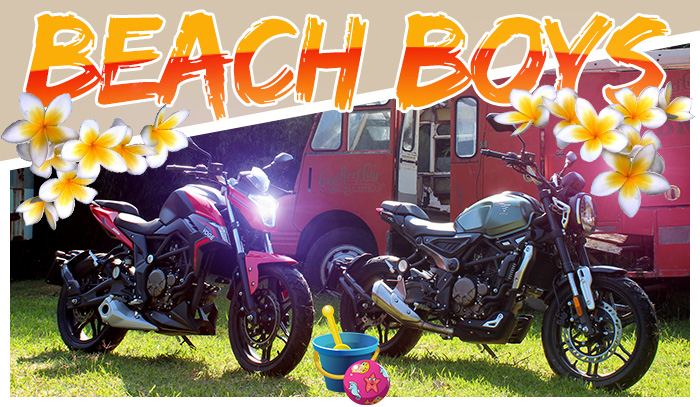 If I were at the coast having a sweet little holiday, obviously a dream due to this virus stuff, I would choose to hire either one of these new motorbikes to comb the beaches and local bars with, or ‘wiff’ if you’re a local. Obviously, another dream as we can’t go anywhere near any local bar. But depression aside, this pair of new bikes to SA put a cheerful smile on my face over the last few weeks.

Why would I hire these bikes you ask, seeing as there could be many options around the 300-400cc classes? Well, it’s the initial cost of buying them that brings down the cost of renting them, right? So, let’s get that out of the way first. The cheeky little red 300R is a mere R49,995 and the retro/funky 300AC, with its military-like metallic green tank, a tempting R54,995. So, to rent either would, or should, be far less than anything in its class from the ‘big names’. Oh yes, all the other players in this competitive market are at least 70% more expensive, interested? 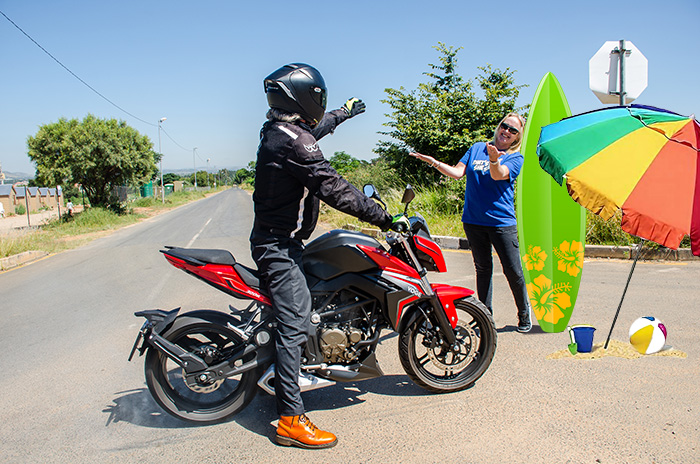 Now before you roll your eyes and declare 'what the fook is a Voge?', let me explain. You may not have heard the name yet (pronounced Vogue), but you may have heard of the parent Company called Loncin, a massive Chinese manufacturer that produces BMW’s 310 range. So, it was only a matter of time before the inevitable arrival of their own ‘300s’ into South Africa, and here they are.

Well, the first two are, and the guys from SA Motorcycles asked me to not only perform the normal road test, but to inform them of anything that needs to be addressed for our market, which I’ll get into later. Meanwhile let’s delve into the technical aspect of this pair of Voges… 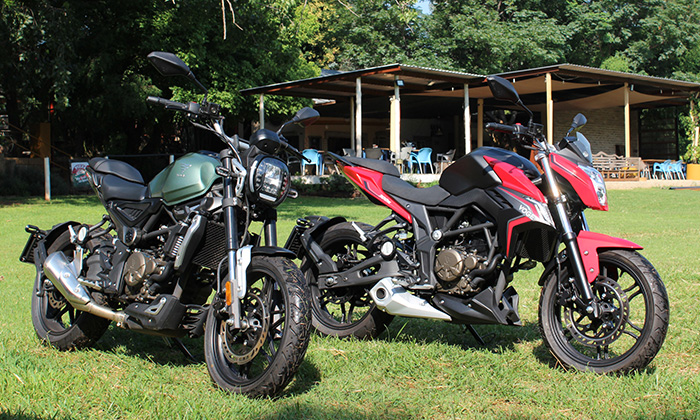 Both bikes have identical frames and engines, the only difference being the bodywork and front-end suspension. The 300R has large diameter conventional forks and the AC has upside-down units. The clocks differ as well and the AC has three backlight colours to choose from, with both bikes having USB ports to charge your phone or similar. Bodywork addition is varied to suit the model and the AC has more, so it weighs 150kg +/-, with the 300R coming in 10kg lighter at 140kg+/-.  Voge claim 29hp@8,500rpm and 25Nm@7,00rpm and both bikes have a 16-litre tank, which will send them through many kilometers with predictably frugal fuel consumption.

So that’s enough specs because I’d like to go to Voge's performance claims of 135km/h, which is a lie. I saw 148km/h in 5th on the 300R, at altitude, but once into sixth it’s more like an overdrive to enhance economy I suppose. So, at the beach I’d predict they’ll surpass 150km/h, more than healthy enough from 292cc. Now here’s another thing, they’re not fuel-injected but have a very impressive flat-side carb (normally reserved for racing carbs from Keihin and Mikuni), and the fueling is spot on with no annoying and irritating surges like some fuel-injection systems provide. Not forgetting you can fiddle with jetting easily if you change the pipe for example, as it does have a restrictive ‘cat’ installed to prevent the death of flowers. 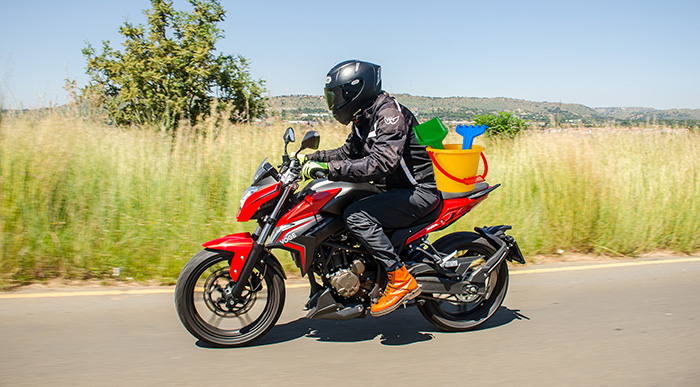 In a drag race the 300R is a little quicker, possibly due to less weight and it does seem to have a louder and less restrictive exhaust, but at high speeds both do get a bit loose. I put this down to the rear shock as the spring is way too soft for our market and the damping needs to be improved. A point I relayed to SA Motorcycles (SAM) and they’ve already been in touch with the Voge factory and the forthcoming new models with have that sorted on arrival, so there we go, problem solved.

So they’re brisk enough to leave traffic behind and super agile through traffic, not to mention quite a lot of fun and highly enjoyable when chasing other bikes around town. Especially when you howl up to the lights with a squealing back tyre, as they don’t have ABS. This never bothered me and I never thought they needed it, just like the old days of total rider control. Either way the large diameter single front disc is more than capable of retarding both in a professional manner.

Sporty or retro is your choice and I always ended up climbing on the 300AC due to its bigger dimensions and laid-back riding style, but that could be my age. They’re well made and finished, besides the rear shock, and have the full support of SAM. They own the Jonway/Big Boy/Go Moto Empire and outsell every importer in SA every month/year by a considerable margin. SAM gives a three-year warranty on all Voge products enforcing their belief in their new range, which fits well into what they already offer. So the new Voges are not just some tiny ‘garage’ business and SAM will proudly offer full spares and support everywhere in SA.

All good news and especially if I’m at the beach bar, fall off after a few ‘drinks’ and break a lever or two…if only that was the case and not forced to be locked up at home, right?

Never mind and one more thing before I depart, there’s a Voge 500 parallel twin on its way that looks like the 300AC for around 70k, tremendous, bring it on. 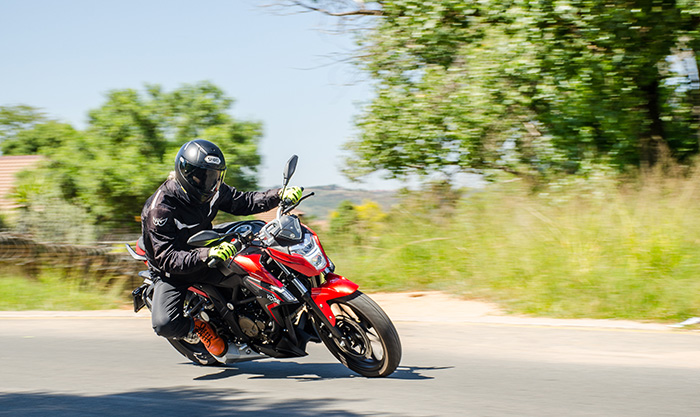 Go to www.samotorcycles.co.za  or www.bigboy.co.za to view more about the Voge range and all their other products.

Or mail This email address is being protected from spambots. You need JavaScript enabled to view it. for enquiries (011 794 6399) 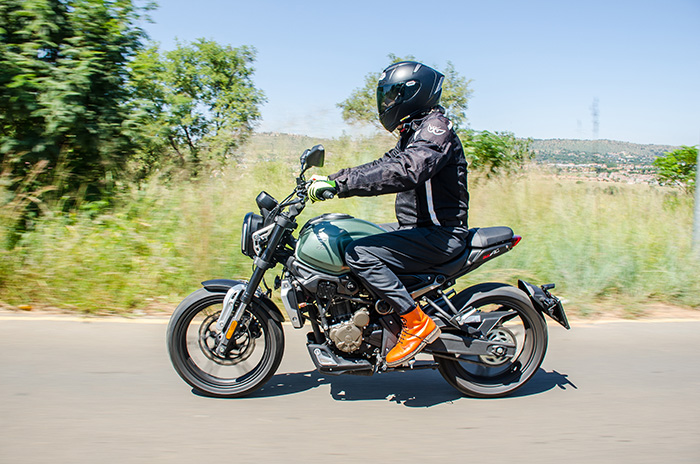