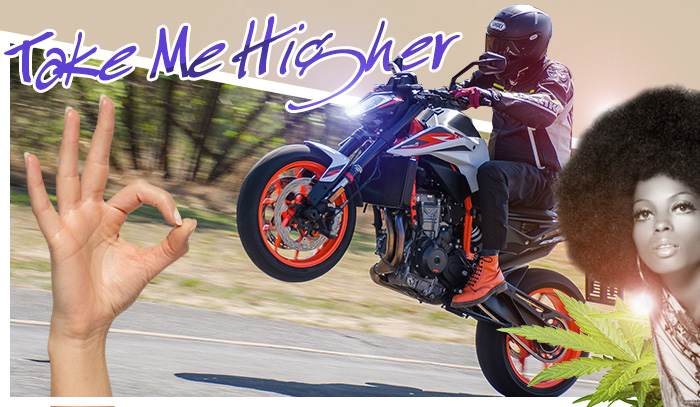 When the 790 Duke appeared in 2018, I was more than impressed with KTM. They’d taken the bold move to ‘invent’ a new engine after years of single cylinder units and, of course, their vibrant V-twins. A very expensive operation on all counts and quite a controversial one seeing as the ‘parallel twin’ tends to be as exciting as a R50 Woolworth’s gift voucher. But that all changed with this engine layout as the 790 spat out 95hp on the dyno and then spawned into their superb Adventure range. Job done then I suppose, well not really.

You see in our disposable world updates are as important as new products, just look at iPhones for example, the teenage curse than kills conversation and the good old verbal joke, remember those? So is this new 890 engine just another unnecessary update adding a bit of sales sparkle to the same platform?

To be honest that’s exactly what I thought, just a 91cc increase, pretty colours, and some fancy suspension, yeah whatever… I couldn’t have been more wrong, within 500m the proverbial WTF! echoed around my cosy helmet. The dramatic thrust from the, now 889cc, parallel twin opened my eyes wider than listening to Donald Trump’s Covid recovery speech. Even though the 890 has the same colour wheels as his face it certainly made me stand to attention more than his Presidential drivel.

So, to uncover my disbelief I decided to do the sort of thing you do with a new girlfriend, as in lift the sheets and take a look. And there we go, a wealth of performance enhancing attributes and not just bigger pistons, the bike I mean, not the girlfriend. 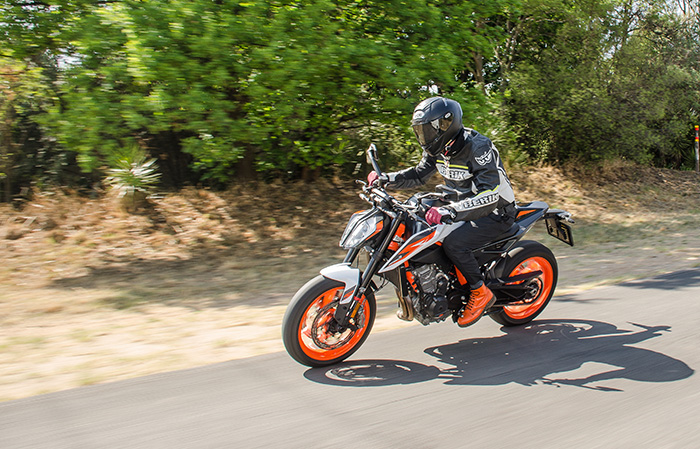 Stuffed inside the usual steel trellis frame is a new cylinder head with bigger valves and more violent camshafts, those bigger and interestingly lighter pistons, heavier crankshaft and flywheel, bigger throttle bodies and more. Even though the engine is superior in all ways KTM also increased the rpm limit by 1,000rpm to 10,500rpm, a very commendable job guys. The result is 120hp (105hp in 790) and 99Nm of torque, which makes the 890 Duke R THE most powerful production parallel twin ever made, now there’s a statement. Obviously a quick dyno run was in order and we saw 110hp@10,460rpm at the wheel and 87Nm, but this bike did have the Akrapovic pipe and link pipe fitted, which adds about 4/5hp. Expensive at 15k but just listen to the noise it makes on this accompanying video, especially when the quick-shifter comes in to play and cracks between changes, delicious sound that. Check out the graph to see the vast improvement over the older 790 motor. 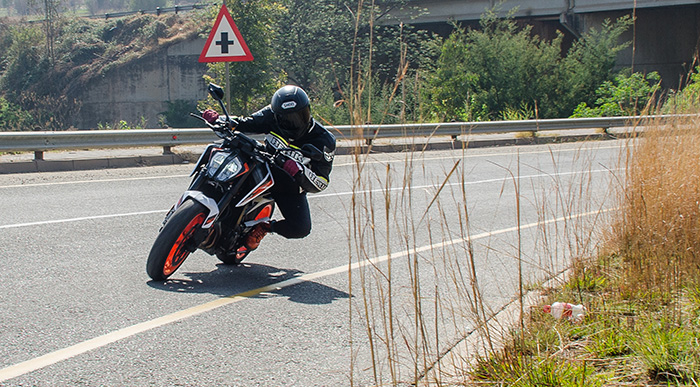 With more beef from the engine comes more weight, right? Wrong again the 890 Duke R weighs 3kg less than the 790 (166-169kg), but it does have a track focused single seat. This is where the 890 Duke R is directed more than the 790 with its posh WP APEX forks and rear shock, quality components to say the least. Not to mention lighter wheels and Brembo Stylema monobloc callipers, so I will. Basically, what you get is a fantastic road-going naked bike with impeccable track manners, especially if you fancy grinding (not the gay app) your knee away using the sticky Michelin Powercup II tyres in the correct manner. 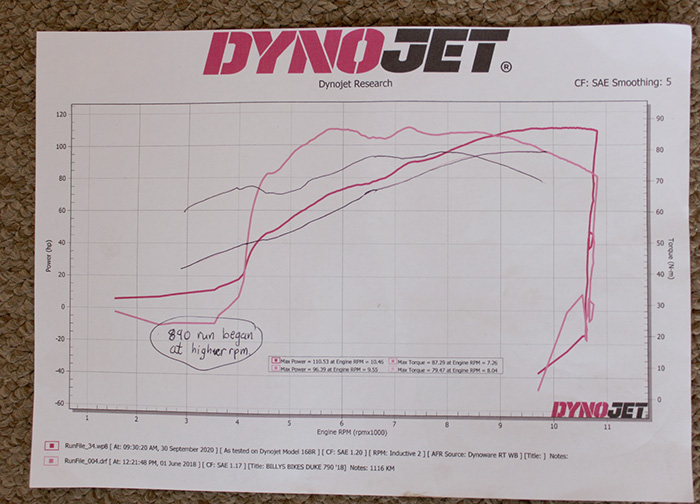 The 890 Duke R also has a taller seat at 834mm (825 on the 790) and a longer wheelbase due to the revised swing-arm (1482mm compared to the 790 at 1475mm). Initially it does look a long bike but let me assure sure it’s as agile as a mountain goat after a ‘bleat and greet’ amphetamine party, if you catch my drift. In fact, the 890 Duke R is now one the best naked bikes ever made because of its ability to entertain all the time and every time, and that’s a very important attribute in this competitive market. It is shockingly fast in a straight line and its ridiculously thin dimensions, when in the saddle, possibly add to why it feels that way. I’ve ridden bikes half the capacity that feel wider and heavier, so it really is a magical act, the 890 Duke R.

Of course, there’s the compulsory massive bag full of electronics which, to be honest, is a boring thing to write about, so I won’t. Just go to www.ktm.com and enjoy yourself with all the information you’ll need.

So, there we have it, not an update but a new motorcycle and my title sums it up perfectly, because KTM has definitely taken the parallel twin higher than anyone ever has. Even Diana Ross with the closing video seems to agree, well sort of, but it is a fantastic tune, as is the 890 Duke R. R189,999 plus the Tech Pack and pipe lifts it to around R215,000, which sounds a lot for ‘900’ naked bike, until you ride it and then it will take you higher than any parallel twin ever has, tremendous. 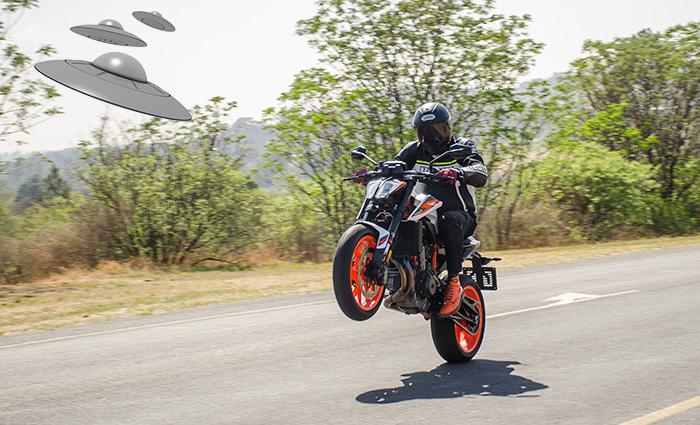