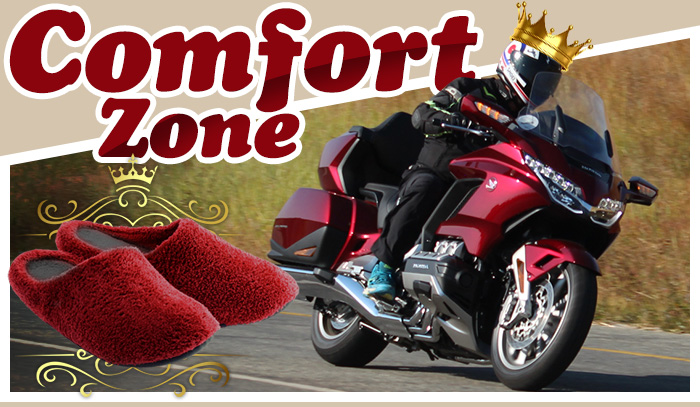 Touring bikes, you either love them or hate them. They are, predictably, huge monsters that devour open roads in unsurpassed (for a motorcycle) comfort levels. Heavy, expensive and normally aimed at the ‘older motorcyclists’, so what’s the attraction then?

Well, in some circumstances, I can’t see what the attraction is either, especially when you have to navigate these things around town which, to be fair, isn’t an environment where they belong.

But this new Gold Wing has actually changed my opinion a little on the ‘monster-mass’ issue, because after the initial intimidation fell away I enjoyed the new ‘Wing more than anything this size I’ve ridden before. Oh yes, the 350kg of pure Honda class turned out to be the best touring bike in this class, or price range.

The 2019 Honda Gold Wing is nothing like the past version, except it looks familiar. From the front wheel to the rear top box things have moved on, a lot! New frame, new engine, new styling and bags of electronics to fiddle with, have taken the ‘Wing to new Honda touring levels, and then some. Honda have had the ‘Wing, under their wing, in their touring stable for around 45 years now in different forms, but with the same principle of moving humans to pleasant places. And, to be honest, there’s not a more pleasant way to head off toward the horizon on a low seat (740mm), that belongs in a 5-star hotel lobby.

Enough about the comfort level, for now, let’s discuss what’s new on this R367,000 Gold Wing. The engine is a SOHC, now four-valve (was two), flat-six cylinder, liquid-cooled chunk, with 1,833cc displacement, developing a claimed 125hp@5,500rpm and 170Nm@4,500rpm. Over 100Nm is there instantly as you waft off the line intent on finding the perfect volume levels for the four-speaker hi-fi system which is, without doubt, one of the main attractions, and also gets louder as you go faster, as well as becoming much louder if you open the top box lid while stationary! Ideal entertainment as one enjoys picnic pasty consumption. The stereo isn’t the only electronic component though, because the new ‘Wing has four power modes, traction control, ABS, ride-by-wire throttle, electronic suspension adjustment and a massive full-colour, car-like screen to see everything you’ve selected and, of course, phone connectivity stuff. It does have full navigation but for some reason this wasn’t installed or activated on our test bike, very irritating that Honda!

Talking of irritations, sort of, this is the manual model we were sent, booooooo! I was hoping for the new DCT auto, wouldn’t you and no bike deserves that more for effortless touring, right? However, the DCT version is R411,000, or around 45k more. How come, when the Africa Twin has only 15k between their manual and DCT models? Still, some ‘old dudes’ will probably prefer the six-speed manual, that had quite agricultural changes from 1st, 2nd and 3rd but the other three shifts were super smooth, bit odd that! 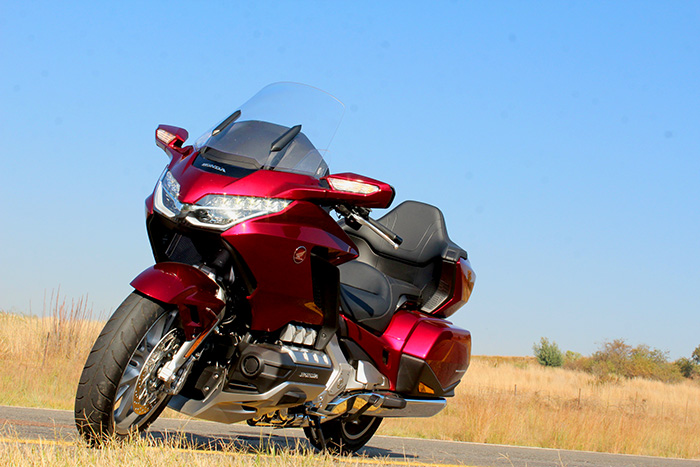 What wasn’t odd, or maybe it is, is how well this 350kg beast handles, as in remarkably agile, but the new Gold Wing is 41kg lighter than the old 2017 bike.  The new chassis with single-sided swing-arm and Pro-Link Showa suspension, and matching technical new front end, is impressive on all counts. And you can set the suspension as you desire with a simple button press, on the move, very cool that.

Maybe you’ll also desire to watch some form of entertainment on the big-screen, seeing as it’ll Bluetooth to anything. Does that mean one could watch an ‘adult movie’? If so, should you inform your insurance company that you do, seeing as it’s certainly far more dangerous and destructive than answering your phone, just a thought! Not sure how you’d fill in your claim form though, if it causes an accident?

The super-hot heated seat (five levels), front and rear, can make you feel like you’ve have an ‘accident’, if you know what I mean, but very useful on a cold day/morning. As are the equally powerful heated grips, which won’t get used too much in South Africa, but they are there if required. Basically, the whole bike is riddled with refinement and comfort that, dare I say, only a car could offer more.

But the biggest chunk of refinement is this new four-valve engine; creamy smooth attributes don’t really do this massive engine justice. On the highway, with cruise control on and economy mode mapping selected, it has a surreal feeling as if the engine isn’t there.  A bit like relaxing in your favourite armchair at home watching TV, at 120kmh though. Sitting back and admiring the view, as the kilometres tick by, is where the new ‘Wing excels, and even the pillion has the same pampering comfort levels as the rider. And so, they should as this motorcycle is designed for two on all counts.

If you want performance though the Gold Wing will provide, with some vigorous throttle action in sport mode. Surprisingly quick off the line and, oh I forgot, this new engine sounds like a six-cylinder racing car when unleashed, a delicious noise to anyone’s mechanically trained ears. My trained ears and eyes had a ball on this new Gold Wing, but I would like to try the DCT ‘auto’ version before giving it a deserved gold touring medal. But for now, it’ll be hard to find any motorcycle that fills the ‘Comfort zone’ better that this.

Go to www.honda.co.za for more technical information and dealer location. 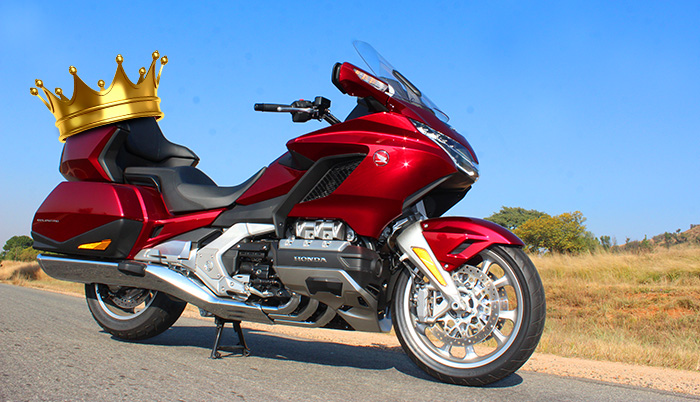