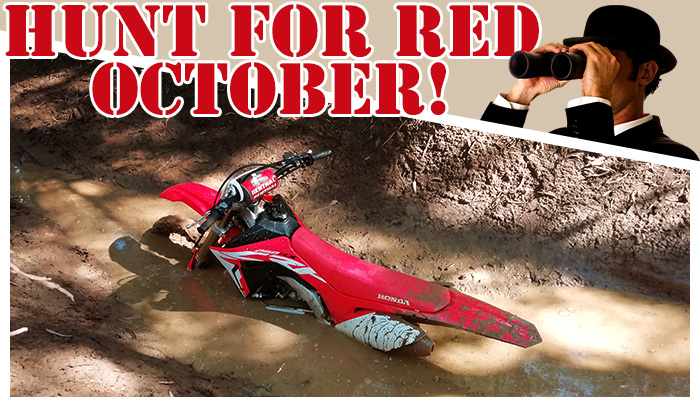 The cold war battle lines have been drawn. The YZ250FX and KTM 250 XC-F are right at home pounding aggressive moto laps, as they battle bushes in the tight stuff. Honda, like the super-power it is, needed a weapon to do battle, so will the might of Honda’s off-road crossover destroy everyone in sight?

Well the answer is yes and no, so let’s discuss the rogue general in the room. The Honda CR250RX is a CRF250R with a larger tank, side stand and 18” rear wheel. This bike should be a long-range fighter-bomber, but alas flirts on the line between racing and a really fun recreational bike, for people looking to do-it-all. As it is, the 2019 Honda 250RX has proven to be an absolute riding pleasure-fest to be on, not a race weapon, for me at least… Mutiny most foul?

Whilst the Honda CRF250R (MX) has a fire-breathing, mid-and-upper powerband, the CRF250RX has a low-to-mid range powerband, yet they have identical engines. How do two engines with identical mechanical parts run so differently? It turns out that the CRF250RX’s black box has different fuel quantities and the ignition advance is for low down power, compared to the CRF250R’s motocross black box, obviously for more dramatic racing scenarios.

So, if it’s not a motocross bike what is it then, you ask? The chassis and suspension package is tuned for a ‘softer’ rider around 75kg and, ridden aggressively, it holds its own with regards to everything but the biggest and fastest motocross obstacles and landings, with the superb 49mm Showa forks soaking up off-road rocks and roots like a thirsty camel, even if they’re arguably too soft for full-on motocross competition.

If you’re trying to ride the RX like its MX brother on the track, you will feel the limits immediately. Firstly, it’ll wallow a bit on high-speed, big landings. The high-mounted fuel tank feels more awkward than a track-specific MX bike when full. It has a tough job holding the off-road fuel capacity needed on a bike with this particular perimeter frame. The shape of the tank isn’t terrible but you can tell when it’s full compared to when half empty.

Above the tank and on the ‘bars is the programmable map switch with its blinking light, and it even includes launch control. The engine is nearly identical to the R with only specific Honda ECU settings uploaded to give it more friendlier off-road manners, as mentioned. The suspension components are similar too, but with feature revised front-end settings and spring rates for off-road excursions. It also shares the same frame as the R version as well as Renthal Fatbar’, multi-position handlebar mounting triple clamps, black rims and a lot more.

Maybe it’s just me but I don’t fully understand what Honda is trying to accomplish. I know that Honda wanted the CRF250RX to be considered an off-road bike, but it is just a softer Honda CRF250R motocross bike. The suspension is softer and the mapping is further down. It is an ‘almost’ bike—almost too soft for motocross and almost too fast for cross-country.

If you are looking for an all-around 250cc four-stroke to ride this weekend and at the motocross track every other weekend, both the CRF250R and CRF250RX are more than capable. The decision comes down to which aspect of the sport is more important to you.

This new RX is R105,999 while the more hardcore MX 250R option is R109,999, so there’s not much in the price difference. Basically, if your battle plan is to use it more for motocross, go with the CRF250R and if your intention is to use it more for off-road and having fun in the bush, then go with the CRF250RX. So how do the CRFs compare to the competition? Well, it just comes down to what side of the fence you’re on, comrade…