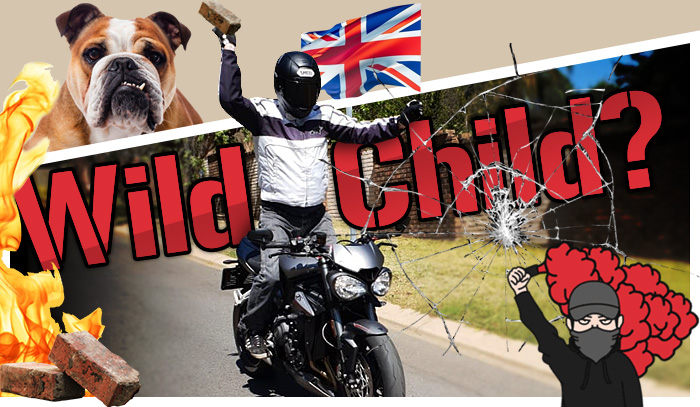 So is it? Is this still Triumph’s mid-capacity mental, wild, stunt machine used by many ‘stunters’, and not forgetting that this new engine is the ‘child’ of the new Moto2 formula. These two reasons alone gave me as much anticipated excitement as an afternoon with the Queen explaining to her what a quickshifter does, over a pot of tea and absorbing posh thin biscuits of course. Now she’d probably give me the same look as if Donald Trump was sitting next to her and have no idea what I’m talking about (like him), but she should certainly be very proud of this British motorcycle, as am I.

You see I’ve always been a huge fan of the 675 triple with its bulging eyes and exposed style exposing one to the elements. But time and changes can go two ways, simply put, better or worse, refined or rough. See where I’m coming from?

Well let’s get this out of the way first then. This IS, possibly, the best naked bike I’ve ridden this year. Triumph has done such a commendable job that the Queen should knight the person responsible instead of some plastic film star celebrity, or maybe even myself? That’s never going to happen though so back to the 765, or the engine to be more precise. It’s fantastic to say the least. So much smoother and refined than the 675, so much so that the 675 feels rough and dated (I rode one during this review to find out). Triumph claim 16% more power and 13% more torque, which all means nothing to me without a Dynojet dyno run, right? They now say 121hp and after the dyno run it made at the wheel, wait for it, 115hp – like WOW folks! To put that into perspective it’s 2hp more than a z900, which I also loved, 3hp less than a z1000, 20hp more than the 675R and nearly 20hp more than KTM’s new 790. Place this inside a new chassis and super-strong revised swing-arm and a feeble weight of only166kg (dry), and the ‘wild’ side is well off the scale. I even saw over 250km/h on those superb new TFT colour clocks with a bit more to go – obviously in a controlled scientific environment…blah, blah.

So the horsepower is admirable but it’s not the whole story because this new motor picks up and revs so much more freely than the 675 on its way to the 12,200rpm rev-limiter. If you’re a fan of massive, childish and sometimes unnecessary wheelies then immediately go and buy this bike. However, to get the 765 RS to perform its clown-like attributes you’re going to have to delve deep into the new clocks and operating system. Very confusing I thought at first but like any new phone it’s easier after a few days of fiddling. To be honest there’s so much going on here that you’re better off having a visit to www.triumphmotorcycles.co.za for that explanation. But there’s all the traction control and mode settings you’ll ever need and a very entertaining array of clock displays moving the rev-counter around, never seen that before. The activator switch under the indicator switch is a bit close though and often you put the flickers on instead, my only moan. 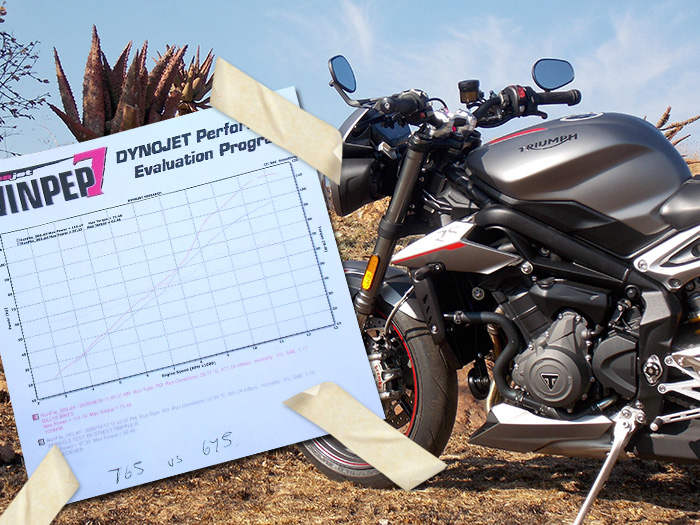 If you’re looking for pleasurable groans though this RS provides on all counts, especially quality ‘standard’ components, way above anything else in this competitive class. Let’s start with superb Ohlins STX40 rear shock, Showa ‘big-piston’ forks, Brembo M50 (superbike) callipers and discs, and the finest matching Brembo fully-adjustable master cylinders on the ‘bars. Then there’s the new build quality, which is all rather pleasant to admire as you wander around the bike.

This matt silver paint is certainly the choice for me over the white and two black derivatives and the RS also comes with a pillion seat and this seat cowl for two options there as well. I especially liked the white stitching on the seat that is also way more comfortable than the 675 as your knees slip under the newly contoured 17-litre petrol tank. As soon as you swing a leg over the 765 you feel at home, comfortable, relaxed and ready for a spot of cruising around town with that iconic aggressive stance. Then after 10 minutes of that get bored and go wild again, it’s your choice and the 765 just soaks up every moment of your input. 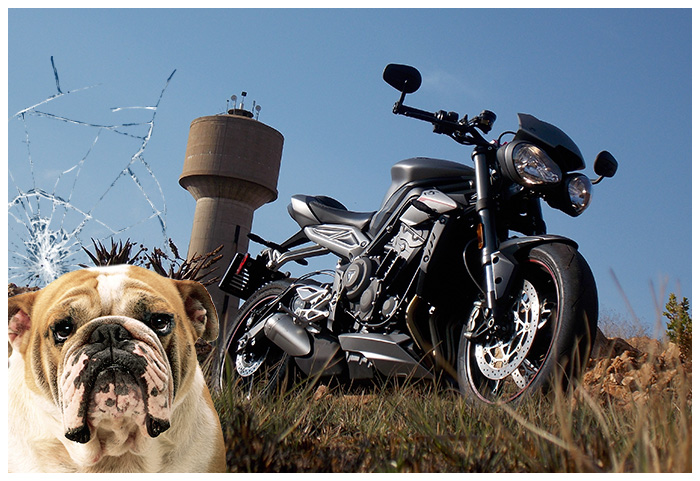 With all these new chassis components, especially the new gull-arm swing-arm derived from their racing development program, it’s hard to put into words how agile this 765 RS is. Amusing street work and, more importantly, with this stuff bolted on, track work is always just a throttle twist away. It’s not even worth going into how good this 765 RS is around a racetrack because it’s obviously superb with the forthcoming Moto2 Triumph amalgamation in 2019. I can’t wait to try their inevitable road bike option, can you?

I can always tell how much I enjoyed a new bike when I don’t want to take it back after a week of tomfoolery and pleasantry; the 765RS is no exception here. In fact at R152,000 I think this is presently the best value Triumph on the South African showroom floor because of the amount of ‘bits’ it’s covered in, if not the best value for money motorcycle for that sort of price. Some statement yes and I’m not being paid to say so and if you’re not convinced yet you certainly will be after a test ride. Then you can tell all your mates you’ve encountered a ‘Wild Child’, that’s not immensely irritating and made of flesh and blood, if you catch my drift?

Go to www.triumph-motorcycles.co.za to book a test ride right now! 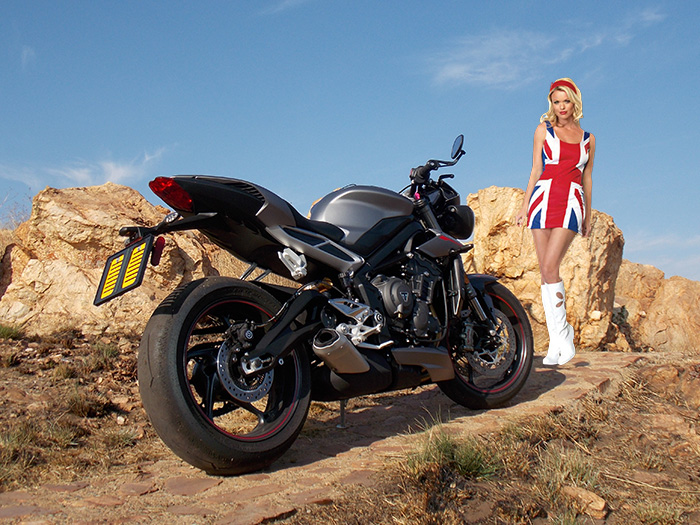