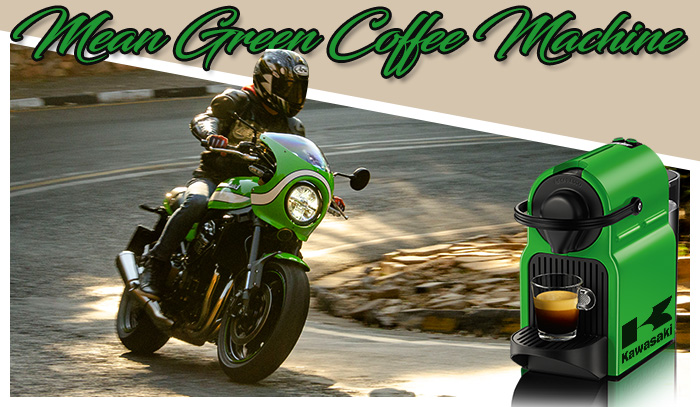 If you’ve all been paying attention you’ll know we’ve recently had the absolute pleasure of playing with the 2018 Kawasaki z900RS? Well here’s its sibling, the posh named z900RS Café, oooh darling. Yes it is a bit snobbish that and Kawasaki royalty named it, not a retro bike but a…. wait for it – Retro Sport, bet that didn’t take long to think up.

So yes we have another form of retro motorbike to add to the ever-growing list from all manufacturers. We’ve even heard rumors that Suzuki are also fiddling with a retro styled GS1000. My advice to all in the industry is to keep them coming because all around the world and indeed here in SA, riders are buying them, so why not?

Anyway enough of this retro promo’, what is this Mean Green Coffee Machine all about? See what I did there with the amalgamation of Coffee and Café, pure genius.

Possibly not, but what IS a stroke of genius are these two new Kawasaki z900RSs because both are tremendous on every count. Exemplary build quality, arguably the best I’ve come across on any Kawasaki, is the big one for me. Then add into the retro equation a gorgeous new motor, superb KYB suspension and the unforgettable desirability factor and you might see why I’m so obsessed with the pair?

I say new motor, which it is I suppose but it is derived from the ‘modern’ styled z900 from last year. The RS has revised cylinder heads, camshafts, pistons and air box, clipping the power from 125hp to 110hp with more claimed torque low down. So with a quick rip on the Dynojet dyno we discovered it does indeed make more torque and horsepower until 7,000rpm where the higher state of tune z900 takes over. Interestingly the RS has two separate throttle valves inside the oval shaped 36mm Keihin bodies, using two separate ECUs. Maybe something to brag about but I’m sure an original 1975 z900 owner will develop the same expression as if you tried to sell him a melted igloo in a bottle, once informed.

They would be impressed if they rode this bike though because the 948cc engine is so smooth in its power delivery it feels a bit Rolls/Bentley like. No big power jumps just linear creaminess all the way to the redline, which by then you’re dipping into the little handlebar mounted fairing in Eddie Lawson mode. If you don’t know who that is visit the ‘Net and you’ll see where Kawasaki obtained the styling on RS Cafe and the matching Vintage Lime Green colour scheme. So while the naked RS version resembles more of the bike from the mid seventies this ‘green’ style only came around after 1980, still it’s a classic right? 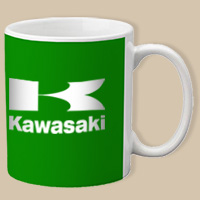 Certainly is and the only differences between the Café and naked RS are the bikini fairing (as they were called in the 80s), green paint, racy seat and handlebars. Now I adore this bike and it’s brother but who on earth put these ‘bars on the Café? Probably designed and fitted after three litres of sake wine because they’re horrid. The rest of the bike is so well made that these wrong shaped and cheap looking ‘bars shouldn’t be there, but that’s a quick few hundred rand fix. Personally, I’d make them more level like the Eddie Lawson replica from the early eighties, the Café would be more comfortable then as well.

But the seat is super soft, which I liked instead of the normal ‘mouse mat’ that we seem to have forced on us today. In fact the whole bike seems to be soft and cuddly and gives the rider a mellow feeling when in the saddle and because of that it’s easy to fall in love. For that emotional reason I think a new owner will never sell this bike like modern stuff after a year or so. The RS Café is a ‘keeper’ that will never age or lose its vintage attraction, don’t you agree?

It’s not all about vintage bits though because the RS Cafe does carry some modern touches, like traction control (1,2 and off), ABS and a slipper-clutch. Apparently, it also has some form of an economical riding indicator, which I never saw or needed to see thank you.

Things I weren’t too keen to see as well were cast wheels instead of spokes, awful 2018 thin and long LED indicators, which should be round and orange like the ’75 z900 had. Once riding though you see none of this and instead revel in those elegant analogue clocks, very nice and classy.

The whole bike oozes class in every respect and it rides as well as it looks. Super-light clutch action lets you get into the big torque curve from as little as 2,000rpm, so town riding is easy to say the least. But what did impress me was the way it turns and handles hiding the 215kg mass commendably. It does have that café racer feel as you carve through your favorite twisty bits and those big radial brakes have super bike stopping power. Twist this all together with splendid suspension and you have quite an entertaining package to play with, besides those irritating ‘bars that is.

What isn’t irritating is the price of R168,900, now that’s a lot of Kawasaki heritage for that price and worth opening your wallet/purse for, some men do carry a purse, weirdo’s.

So the choice is yours, RS or RS Café, I’d opt for the naked one because it’s more like the original ‘75 z900, but either way you’ll become a happy chappy, especially if you like coffee.

Go to www.kawasaki.co.za to locate a dealer and book a highly recommended test ride today. 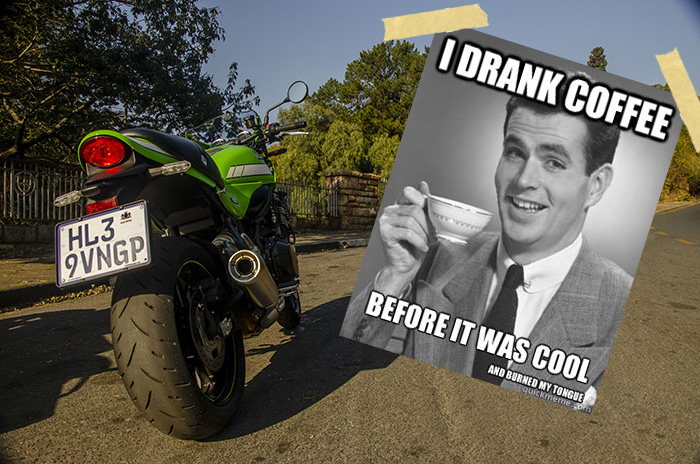