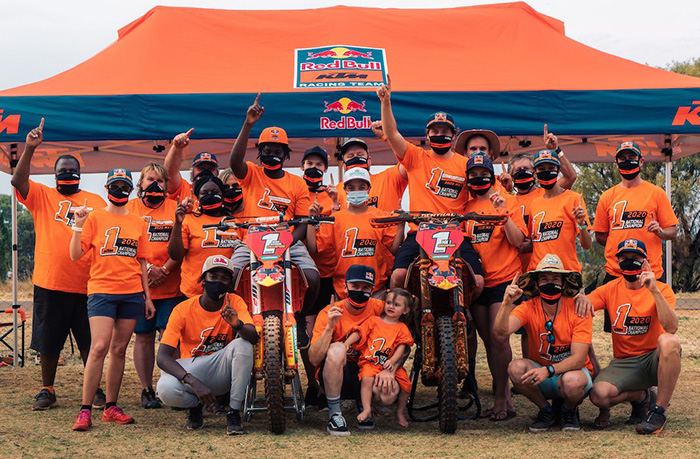 The country’s 2020 National Motocross champions were crowned in Bloemfontein this weekend. The series came to a close with an exciting double-header round where Red Bull KTM’s Tristan Purdon took top honours in the premier MX1 Class. Effectively dubbing Purdon as the best Motocross rider in the country.

The victory came especially sweet for Purdon after last year’s season finale where he finished as runner-up. In a bid to set the record straight this time around, Purdon lined-up in Bloemfontein leading the MX1 Class by a single point. In excruciatingly hot conditions with temperatures above 38 degrees Celsius, the rider launched his attack. With consecutive victories in the first three heats and a third place in the final moto, Purdon took the victory overall in both rounds to secure the 2020 title. 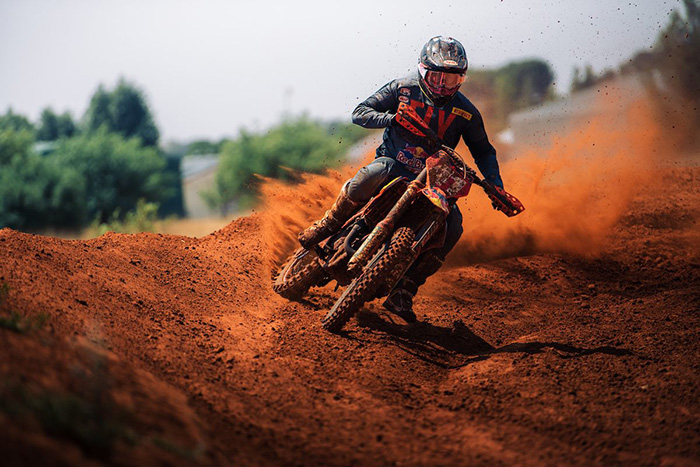 “I can finally say it – I'm the 2020 MX1 Champion! That is a wrap for the season – thank you is not enough to everyone in my corner,” said an elated Purdon.

Adding to the celebrations in the orange camp was yet another championship title courtesy of young gun Jonathan Mlimi, who stormed to victory in the High School Class. Having fought his way back from an injury that ruled him out of the 2019 season, Mlimi was determined to reinstate himself as the frontrunner in his class.

“We did it! This time I managed to take three hole shots and another four wins – which makes it 8/8 victories since the season restarted. The hard work and training really payed off – thank you to everyone who supported me,” said Mlimi. 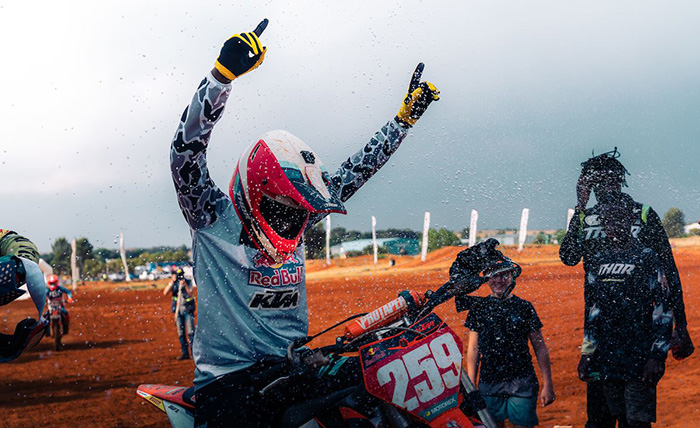 Rounding out the orange squad this weekend was Kerim Fitz-Gerald. While the rider was unable to make up the 20-point deficit keeping him from the top of the MX2 leaderboard, he finished off the season with an outstanding performance.

KTM South Africa’s Marketing Manager Louwrens Mahoney gave a parting shot as the season came to a close: “What a tough and demanding weekend it was with the track getting so rough, the unbearable heat and two solid days of racing! I am so proud of the team and their achievements, not just at this event but over the entire year. We’re going into 2021 with the MX1 and High School Championship, which is a massive confidence boost for the riders and the team. We will work hard in the off season to maintain this form and to come back even stronger!” 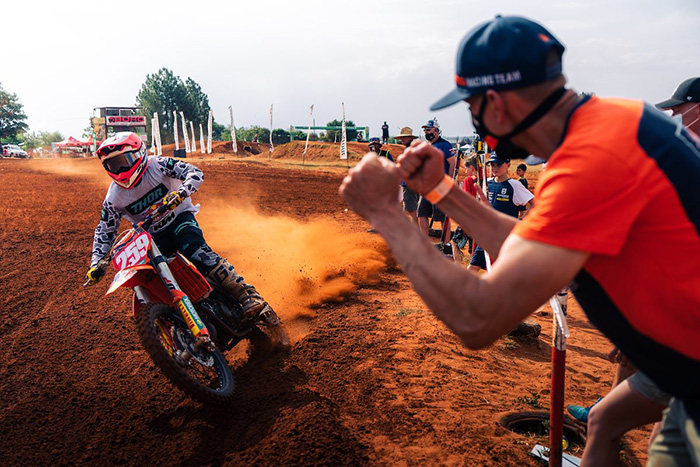 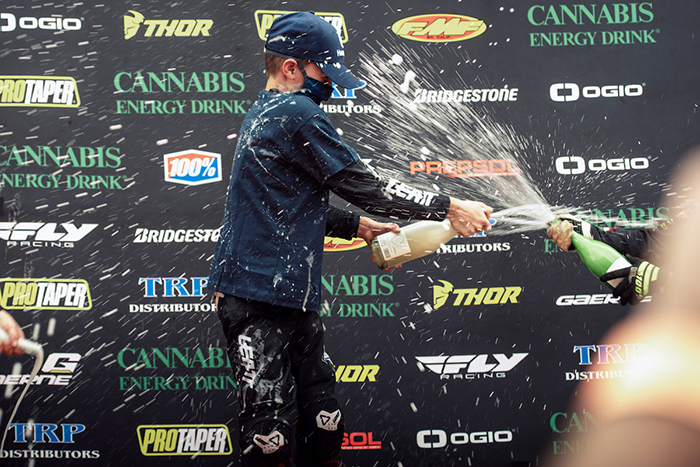 Husqvarna Racing’s Neil van der Vyver could not have asked for a better end to what has been a tumultuous 2020 season. The young gun stormed to victory in an exciting National Motocross season finale in Bloemfontein this weekend to defend his title as the reigning 65cc champion.

This will be the fourth national championship of what is quickly becoming an illustrious career for Van der Vyver. Having represented Husqvarna South Africa since 2016, the rider is a precocious talent stacked with potential. He is not only an exciting prospect for team, but the future of South African motorsport as a whole.

“I won all four heats this weekend – I couldn’t have asked for a better way to finish the season. Thank you to everyone who has supported me and never stopped believing in me this year,” said Van Der Vyver. 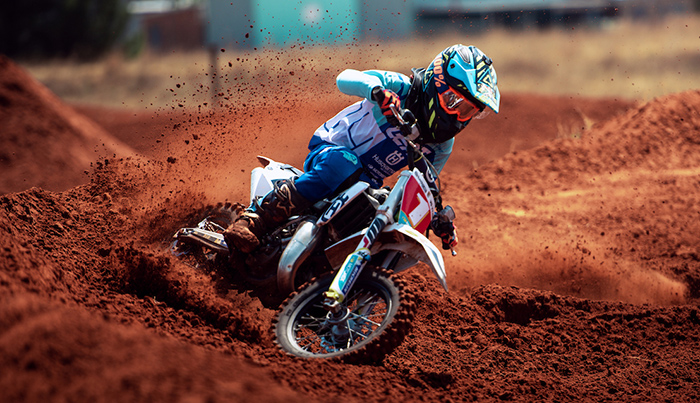 Husqvarna South Africa’s Brand Manager Fred Fensham waxed lyrical, “We couldn’t be prouder of our young Neil. To be a four-time national champion at 12 years old is an incredible achievement – we look forward to seeing what the future holds for him.”

It was a challenging season for teammate Maddy Malan, who has been fighting his way back up the MX1 leaderboard since a crash set him back in the first round. While he was unable to make up enough points to defend his 2019 title, the rider ended off the season on a high note by snatching victory in the final heat. 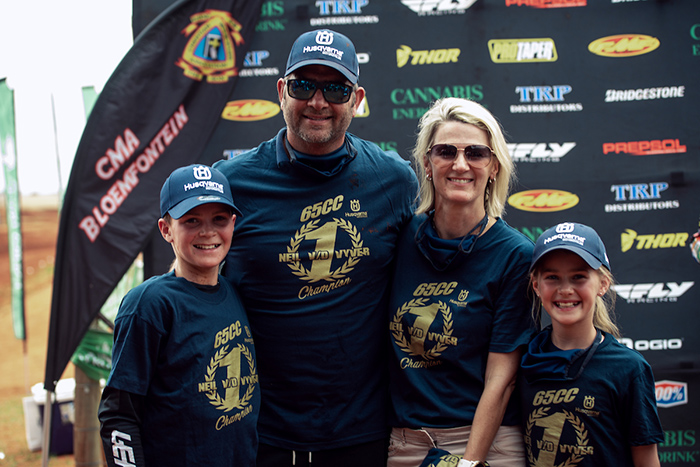 “It’s been a rollercoaster season for Maddy after that big crash at the start of the year. He never stopped fighting to get back on the top step and proved that he certainly has what it takes to reclaim that red plate after the way he performed in the final heat,” said Fensham.

Rounding out the squad this weekend was Husqvarna’s newest recruit Dalton Venter. Having only stepped up into the MX2 Class at the start of the season, the young rider has seen tremendous improvement in his performances. With a determination to shake off his rookie status in the MX2 Class, Venter will certainly enter the 2021 season swinging. 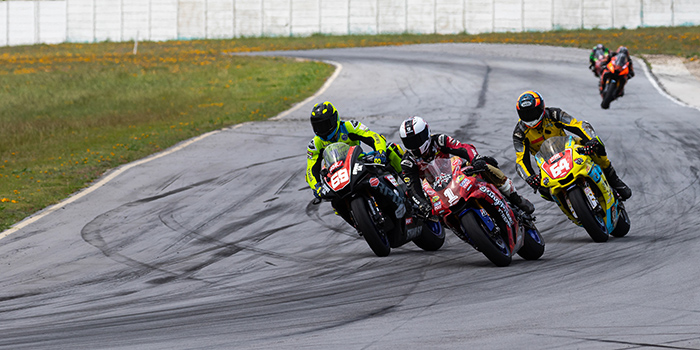 After a disappointing outing at the previous round, where the recurrence of an old nerve injury spoilt his chances of a decent points haul, McFadden bounced back in Friday’s qualifying sessions, topping the timesheets in all three to claim pole position for both heats. He was just over half a second quicker than Seller, who just got the better of Garrick Vlok (DCCS Coring, Cutting and Sealing Yamaha R1). Otto led the way in the 600 class, taking pole position from Iozzo with Brett Roberts (Lights by Linea/RPM Center Yamaha R6) not far behind on his first visit to Aldo Scribante. The Bridgestone SuperBike grid was headed by Ntisana with Themba and Ian Thomas (SA Compressor Hire Kawasaki ZX10R) alongside him. 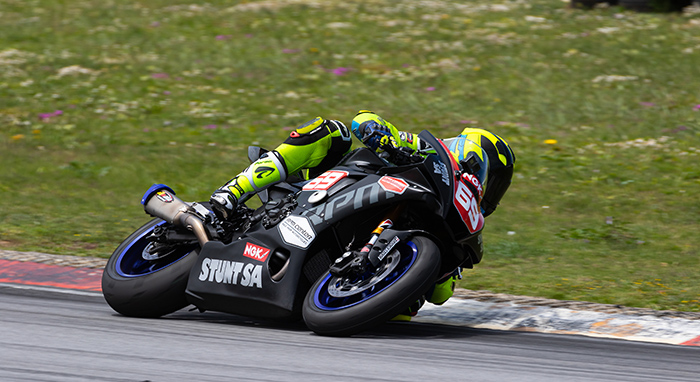 In the first heat, McFadden grabbed the lead from pole and opened up a substantial gap which he was then able to manage, taking the win by nearly eight seconds. After an early battle with Vlok, Seller, knowing that second place would give him the championship, rode a tactical race to make sure of the title. Vlok had to settle for third. A poor start hindered Iozzo’s 600 challenge in the opening heat. Although he was able to narrow the gap to Otto, he had to settle for second behind the rider from George. Roberts was another who didn’t have a great start but his race didn’t improve. A huge crash through the high-speed Hangar corner ended his race day. Luckily he wasn’t hurt, but his bike was a write-off. Ntisana and Themba had a great fight for the Bridgestone SuperBike win, with Ntisana just in front at the flag. Thomas was keeping a watching brief until he crashed out. 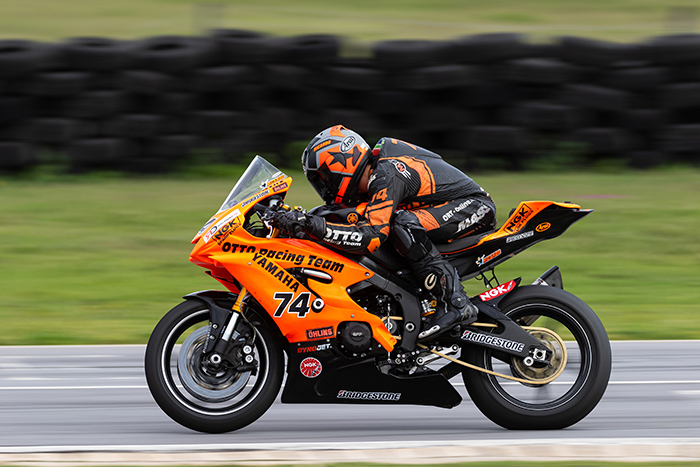 In the second race, McFadden again grabbed the lead when the lights went out, but he ran wide at the final corner of the opening lap allowing Seller into the lead. For the next couple of laps, Seller led the way with McFadden and Vlok just a couple of bike-lengths behind. Vlok had a spectacular dismount on the main straight after his bike burst into flames, leaving McFadden to challenge the newly crowned champion. This he did just a lap later and went on to take his second win of the day by almost 10 seconds. Otto looked like he was going to take his second SuperSport 600 win of the day when he opened up a substantial gap in the early stages of the race but Iozzo had other ideas and slowly closed the gap, taking the lead on the final lap to claim victory. Ntisana and Themba resumed their battle at the front of the Bridgestone SuperBike field, but Ntisana crashed out early on, leaving Themba to take his first win.

McFadden’s two heat wins gave him the overall SuperBike class win from Seller and Vlok. Iozzo’s second race win was enough to take the overall win in the SuperSport 600 class ahead of Otto while Themba the Bridgestone SuperBike win from Ntisana. 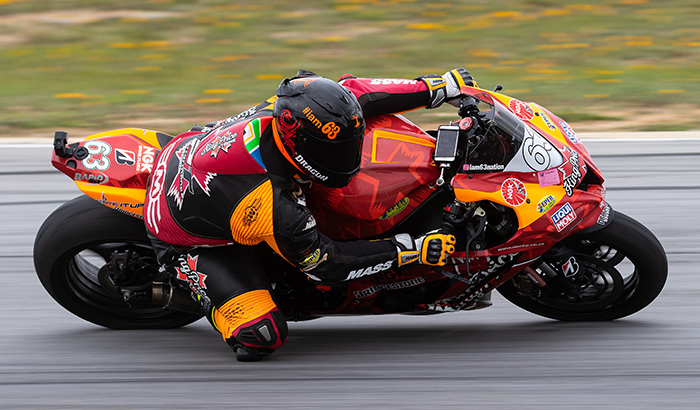