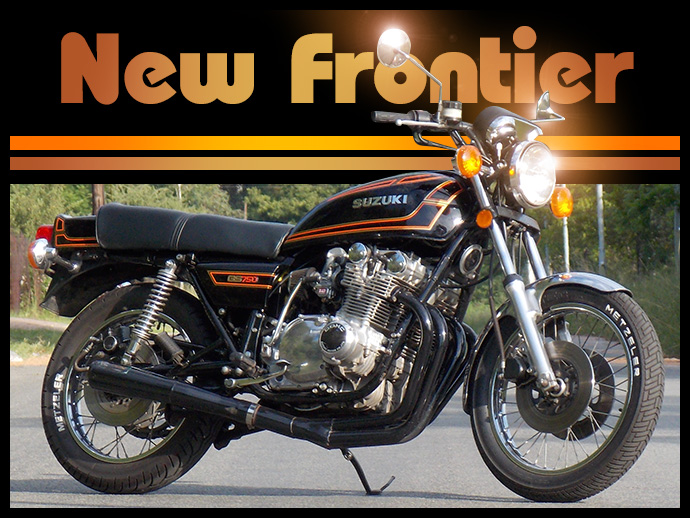 At the beginning of the roaring seventies two motorcycles were dominating the Japanese four-cylinder performance market, the Honda CB750 and of course the Kawasaki Z1/Z900. However, Suzuki had only the GT750 three-cylinder two-stroke and soon realised they also needed a ‘big’ four-cylinder four-stroke to keep in contention. They did release the RE-5 rotary bike in 1975 but that failed and nearly sunk the company due to massive development costs.

Then in1976 Suzuki changed everything with the advent of the then, remarkable, Suzuki GS750 and it saved them financially and spawned a whole new era of the famous GS range, which still runs today.

Testing of the GS750 began in 1974 and in October 1976 the GS750 was on sale to the public and they devoured them off the showroom floor. It instantly became the best handling and fastest four-cylinder bike ever made and kept that title for three years (well maybe the Z1000 was a bit quicker when it came out but didn’t handle as well), which was its production cycle, until Suzuki replaced it with the foul handling GSX 16-valve version.

The heart of the GS was its gorgeous 748cc, DOHC, 8-valve engine with an incredibly strong roller bearing crankshaft and five-speed gearbox. Suzuki claimed around 70hp and 60Nm of torque, enough to propel the bike to 200km/h and record a 12.8-second quarter mile time, could you imagine that in 1976, nothing came close! It was also lighter than the Kawasaki with a dry weight of ‘only’ 228kg, don’t forget none of the exotic materials that we have today were ever seen on these bikes, just steel and aluminium alloys folks.

The GS had needle bearings in the swing-arm instead of old bushes and a stiff steel frame and it literally ran rings around anything, setting new handling standards in the day. And even this fine example we have here of a 1978 model handles respectably well for its age. 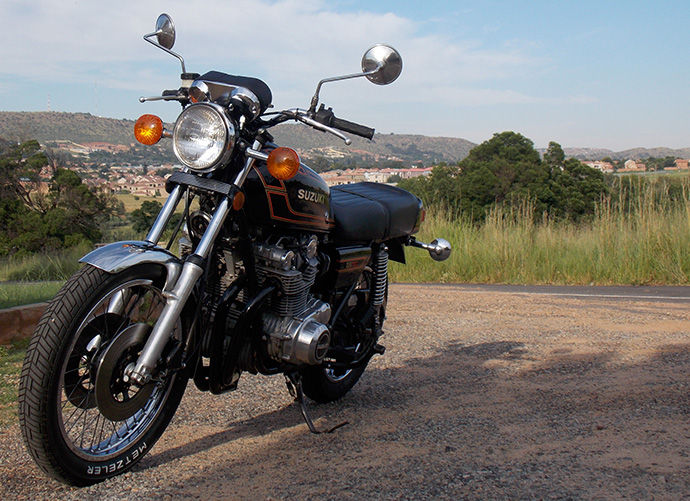 This handsome 1978 bike, with 58,000km on the big round clocks, that have a digital gear position indicator from way back then, which still works fine, has twin discs when the first bike in 1976 had just one. A good idea I’d imagine to add another 292mm disc with single piston callipers because of the performance that it offered, don’t you think?

The only things that aren’t stock here are the horrid exhaust, which the owner is about to replace with a Vance & Hines, and the air box has gone in favour of four ‘genuine’ K&N filters and that’s it, the rest is completely original and nothing has been restored, just lots of cleaning and polishing, sweet, eh? The owner said, name withheld, he had to increase the main jets by a massive 25% to get the top end fuelling correct, interesting! And the original points have been thrown away in favour of a Dyna electronic replacement, good idea.

I was excited to ride this GS because I had one in the UK in the late seventies and loved it and, after riding this example, I most certainly still do. Even though it weighs around 230kg it doesn’t feel like that all. You can throw it around like anything made today with the odd bounce and slight wobble that lets you know it’s a ‘seventies boy’, no wonder it felt incredible in 1976. The hilariously thin tyres (3.50x19 front and 4.00x 18 rear) are new Metzelers which help with quick direction manoeuvres and even in a straight line the GS is surprisingly stable, unlike the later GSX range!

Even the brakes weren’t as bad as I expected, but you do have to squeeze them like you are trying to kill a giant python, if you know what I mean? But in 1978…

What I really enjoyed though was the comfort levels provided by that hyper-soft seat and big rubber footrests, not to mention the best gearbox (five speed) that I’ve felt over the past few years of riding new bikes. Is that a forgotten art now and Suzuki was and still is the master of that trait. Yes, you do get a few tingles though the ‘bars but it most certainly doesn’t feel like a 40-year old motorbike, showing how well these engines were made in their day.

The performance is quite impressive too. With the K&N filters and loud exhaust it does sound like a typical seventies in-line four and will easily scream past its 9,000rpm red-line towards 10,000 and above, no rev-limiter here I noticed! So I backed off because I didn’t want to bend any of the eight valves and get shot in the process but, yeah, 70hp feels about right and I’m sure it’ll still see 200km/h on the huge speedo. Certainly fast enough to catch out all cars from the lights, and some surprised bike riders too, which always gave the ‘thumbs-up’ afterwards.

Actually that sums up this bike, it’s cool, cute, and all motorcyclists want to take pictures and talk about it, which means Suzuki did one hell of an impressive job in 1976, right? 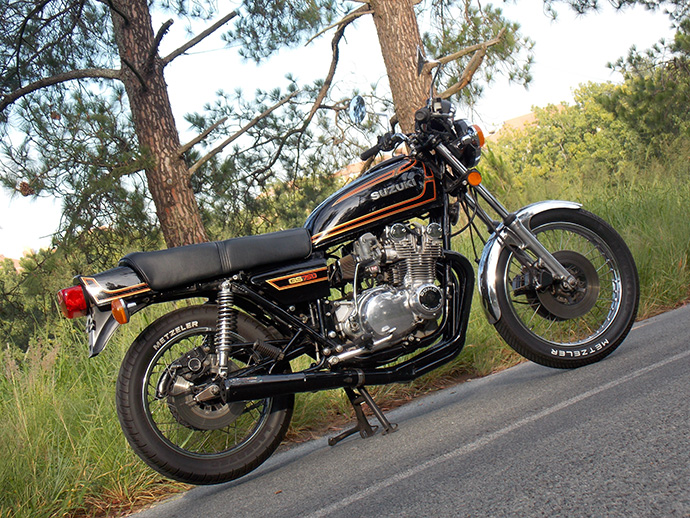