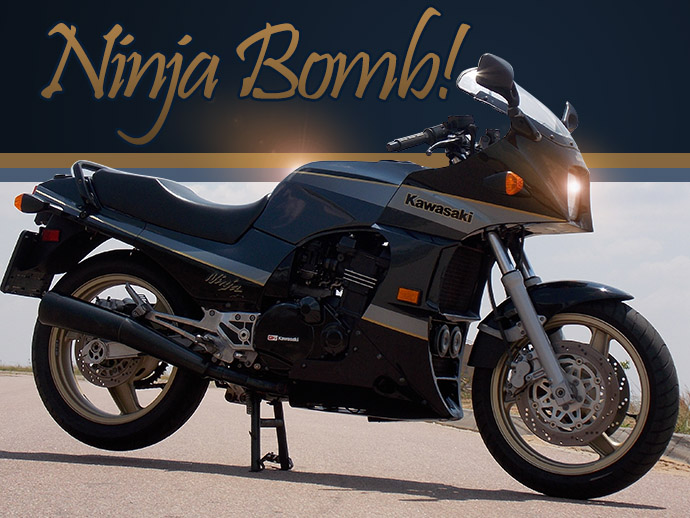 If there’s one bike that shocked the world of motorcycling it has to be the advent of the incredible (in 1984) Kawasaki GPz 900R, or ZX900A in the US, or Ninja 900 as it was renamed at a later date. Kawasaki released their ‘Ninja Bomb’ onto the showroom floors early 1984 and everything changed overnight.

Its revolutionary design, which was kept a close secret for six years prior, included the engine as a stressed member of the frame and the first 16-valve, liquid-cooled in-line, four-cylinder engine displacing 908cc and producing a claimed 115hp. Due to its aerodynamic bodywork the GPz 900R became the first production motorcycle to officially pass the ‘magic’ 150mph (242km/h) barrier and in the hands of Jay ‘Pee wee’ Gleason, who has the physique of a 9-year old boy, it ran a 10.55- second quarter-mile, but don’t read too much into that because in reality it ran around 11.2-seconds, but that’s American marketing for you.

Also in 1984 two ‘works’ GPz 900Rs were entered into the Isle of Man TT Production class and destroyed the opposition with a 1st and 2nd placing, and of course sales went through the roof. The GPz 900R was so good that production continued up to 1996 in the USA and until 2003 for the Japanese market, amazing! And let’s not forget that it also became a film star with Tom Cruise flying about on one in the Top Gun movie, but some say, including myself, that it was actually the GPz 750R version, who knows?

But what we have here, in pristine condition, is a 1990 model, which I was lucky enough to be allowed to ride. The difference between this and the ’84 model is a 17-inch front wheel (16-inch in ’84); a revised swing-arm, twin-piston calipers and the anti-dive forks found on the original were ditched for more conventional, and far better front forks, otherwise it’s basically the same as the 1984 bike, but it’s now called the 900 Ninja. Also, if you didn’t already know, the GPz 900R is the earliest member of the Ninja family of sports bikes and that name is still synonymous with Kawasaki motorcycles today.

The first impression when I rode this gorgeous black/gold version is how long the reach it is to the ‘bars, and skinny too, when today’s sports bikes hang you over the front end. Even after riding all the latest bikes this GPz is still a sweet ride and can easily be used on a daily basis. The engine is creamy smooth with hardly any intrusive vibration and still revs cleanly into the redline, which I never did, honest mister!

You can chuck this 230kg Ninja around with little effort and it’s hard to believe it’s 25-years old, probably because it’s only covered 29,000km. Either way, I can totally see why this model remained in production for so long and the original Kawasaki designers can most certainly be proud of their 1970s creation and respectfully deserve to have free Sake for the rest of their lives, and probably do – hic! 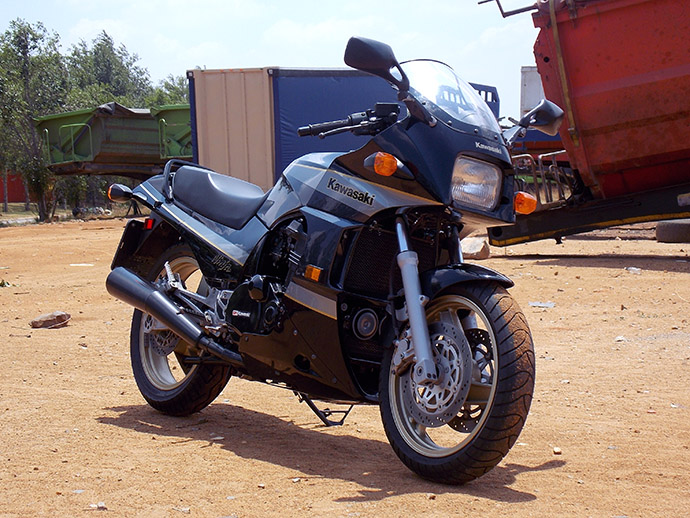