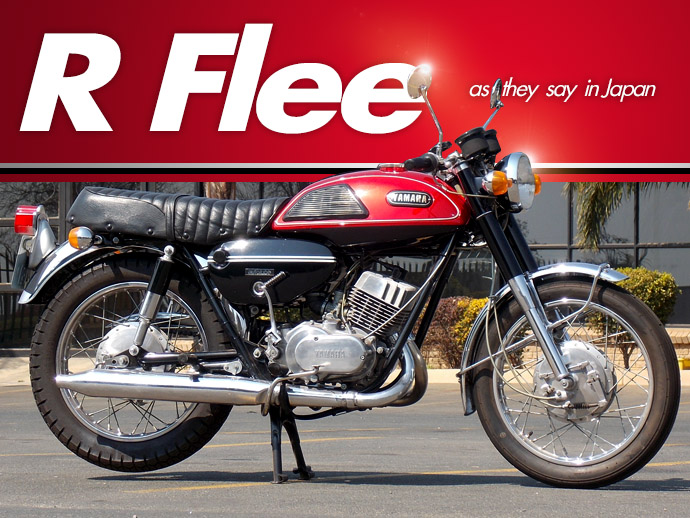 Put your hand up if you want this in your garage? Well that makes 6,349 of you and myself. Gorgeous little 350 Yamaha from 1969, unrestored and totally original makes this motorcycle more desirable than a night with half the South African national netball team after taking a box of Viagra derivatives – well maybe?

The first 350 was called the YR1 and released to the salivating public in 1967, and then obviously the YR2 appeared the following year with the advent of Yamaha’s all conquering TR production racer that set new standards around the track. Then in 1969 this model appeared with its shiny motor that produced a very respectable 36hp combined with a weight of only 157kg it tore through the quarter-mile in 14.0 seconds and attained a top speed well over 160km/h. Now that’s quick for 1969 and of course being a Yamaha it was as reliable as your granddads pencil sharpener.

The YR3 also had horizontally split crankcases, when the old British garbage had vertical, so it was less prone to drip oil and far easier to work on. It also had an autolube function so pre-mixing two-stroke oil was now a thing of the past and since then the 350 two-stroke badge was ‘owned’ by Yamaha and still is.

To ride this hyper-cute 350 is a lot of fun and very easy to live with. The motor is creamy smooth emitting a gorgeous ‘dumm dumm’ noise on idle and predictably spews out clouds of two-stroke smoke when pulling away – remember that? And why does that still smell nice to us ‘older’ riders?

Also the five-speed gearbox will embarrass many modern day efforts, which seems to have become a bit of a lost art in our ‘modern’ world. But the most outstanding aspect of this R3 is the tiny dimensions. If someone rode it blindfolded, which isn’t a good idea, I’m convinced they’d say it’s a 125, until they hit the power-band and violently expel various profanities!

This one also had the original owners manual and workshop book, which are as rare as a woman who buys the first round of drinks, all adding to value, and if you’re wondering what that is – think around the 100k mark, or maybe more! Not so sure you want one in your garage now, are you?