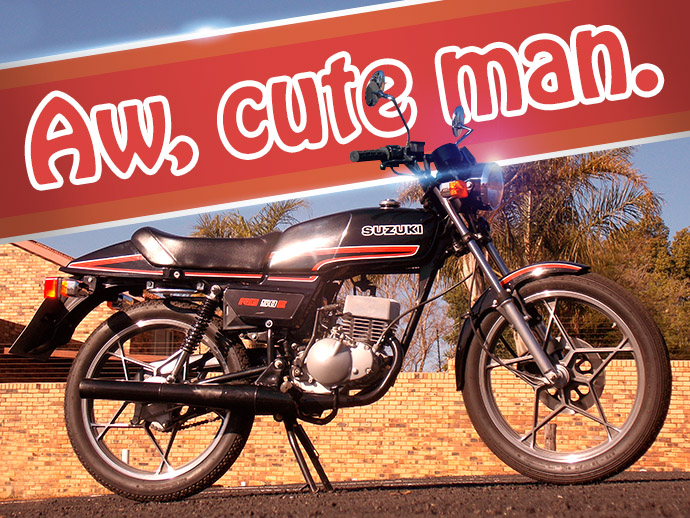 What ever happened to the 50cc motorcycle class? Well for one reason or another they seem to have been lost in the sands of time but now there’s a huge revival of the feisty little teenage drool machine in South Africa, which is more than refreshing to behold.

We recently found this gorgeous example of a 1981 Suzuki RG 50 E and Bill managed to grab an exciting ride on this fully restored example. And came away impressed, well sort of…

The RG 50 E was first introduced in 1979 and received various updates until this model appeared. It now had a posh new tank and seat cowl, star cast wheels, twin clocks and weighed in at the same weight as a very fat sheep, or 72kg. The unbreakable, unless you were a spotty teenage youth, air-cooled engine churned out a quite impressive 6hp and propelled the tiny Suzuki to an indicated 60kmh, or just over if you were telling your new and freshly washed girlfriend whilst trying desperately to remove bits of her clothing.

This one was found dead in a garage and after 40-50 hours of restoration we have this. The frame was repainted, tank, side covers and seat cowl painted to original spec, rebuilt the motor, new tyres and loads of other stuff equated to this enviable machine, because everyone wants to own it. It’s now estimated to be worth around R25,000, so unfortunately a teenager can’t afford it anymore, which is probably a good thing because it would be fooked in six-months – as they do.

To ride this RG 50 E is quite a comical experience. It’s a tiny motorcycle and feels more like a mountain bike with an engine. It also emits an intoxicating waft of good ol’ two stoke, which we all miss, right? You need to rev hard to pull off briskly, obviously, but when the little needle on the rev counter swings north the engine actually feels surprisingly brisk and generates a smile equal to the first ‘slipping of the tongue’, if you know what we mean? It doesn’t feel particularly stable though compared to today’s rides but in 1981 who cared or knew better?

So it’s now up for sale and probably sold by the time you read this but for now we’re glad we had the chance to ride a classic old ‘50’ once again, wouldn’t you?